German authorities have raided a far-right crime network, in their second major operation in two days. More than 500 officers, including special units, targeted 27 homes and business premises. Ten arrests have been made.

The detained were aged between 24 and 55, and were members of a far-right network allegedly involved in drug and weapons trafficking as well as money laundering. The raids took place across the states of Thuringia, Saxony-Anhalt, and Hesse.

Those targeted by the 500-strong police contingent were members of the neo-Nazi groups Turonen and Garde 20, according to public broadcaster MDR. Authorities claim that the two groups were heavily involved in the distribution of narcotics in Thuringia, most notably trafficking crystal meth.

According to the Thuringian State Criminal Police Office (LKA), nine arrest warrants were carried out, and a further person was detained when drugs were found. The office of a lawyer in Hesse was also searched by police, as it was believed that the individual in question was complicit with the groups’ money laundering activities.

The raid is the second major offensive by German police in as many days. On Thursday, more than 800 officers were on duty as police in Berlin and Brandenburg carried out 26 raids across the region to enforce a ban on a Salafist group which was advocating terrorist attacks and the killing of Jews.

Berlin Interior Senator Andreas Geisel told a news conference that 19 members of the Jama’atu Berlin were targeted during the raids and that the group had been under surveillance for two years. 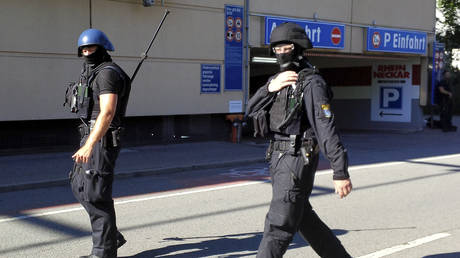