A German meat processing factory at the center of a local Covid-19 outbreak that put two neighboring districts on quarantine has requested government support. The move angered German officials, including the agriculture minister.

“I don’t have much sympathy with this,” Agriculture Minister Julia Kloeckner told the Bild am Sonntag newspaper, commenting on a request by the Toennies meat factory in the state of North Rhine-Westphalia. Companies in Germany are entitled to “labor cost refunds” if they were forced to go on lockdown by the health authorities but still had to pay their employees.

Toennies has recently requested such a refund. Yet, it is an outbreak at its factory in late June, which saw some 1,500 of its employees testing positive for the virus, that prompted the lockdown in the first place. The authorities also decided to place two neighboring districts in Germany’s most populous region on a quarantine as well, out of precaution following the incident. Since “an entire region” was forced into lock down, such reimbursement claims would certainly “not help to lessen the public’s irritation,” Kloeckner noted.

Her sentiment was shared by the regional labor minister, Karl-Josef Laumann, who advised “Mr Toennies and his business partners” to “think very hard about how much more we expect the people of North Rhine Westphalia to put up with.”

The fact that the outbreak was allegedly facilitated by the lack of safety precautions at the factory, and violation of the work safety rules amid the pandemic, only added fuel to the fire.

Anton Hofreiter, the head of the Green Party faction in the Bundestag, said the move shows the company management is not to be trusted. “Anyone who relies on a system of exploitation, risks human health and is partially responsible for the quarantine measures imposed should exercise restraint when applying for potential reimbursement,” he said.

Linda Teuteberg, the Secretary General of the usually business-friendly liberal Free Democratic Party also called on the company to take responsibility for the previous lack in health protection measures for its employees.

The company has not responded to the criticism as of yet. Neither has it withdrawn its reimbursement application so far. It is not clear what sum the company is seeking to recoup.

Earlier, North Rhine-Westphalia Prime Minister Armin Laschet called the Covid-19 outbreak at the factory the “largest occurrence of infection” within Germany. At that time, authorities imposed a week-long quarantine on the two areas in the region, incorporating a total population of about 600,000 people, that was scheduled to last until June 30.

The factory itself was closed on June 17 and is not expected to re-open at least until July 17. 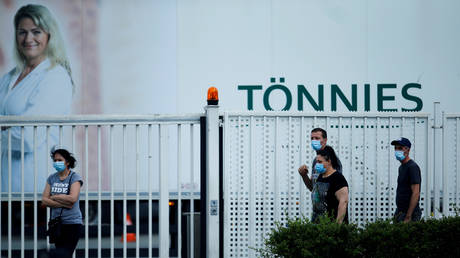