German Foreign Minister Heiko Maas has hit out at protesters who compared their struggle against restrictions to the struggle of the anti-Nazi resistance, accusing them of “trivializing” the Holocaust.

“Anyone who compares themselves to Sophie Scholl or Anne Frank today is mocking the courage it took to take a stand against Nazis,” Maas tweeted on Sunday.

It trivialises the Holocaust and shows an unbearable ignorance of history. Nothing connects the corona protests with the resistance fighters. Nothing!

Maas’ outburst came a day after a woman in Hanover spoke at a protest against coronavirus restrictions, telling the crowd that she felt “just like Sophie Scholl,” a student sent to the guillotine by the Nazi regime in 1943 for distributing anti-war leaflets in Munich.

At a demonstration in the city of Karlsruhe last weekend, an 11-year-old caused uproar when she compared her lockdown-defying birthday party to Anne Frank’s life of hiding from Hitler’s forces in occupied Amsterdam.

Germany has so far recorded almost 928,000 confirmed cases of Covid-19 and over 14,000 deaths, and went into a new partial lockdown on November 2. Restaurants, bars, theaters, cinemas, and gyms have been forced to close for a month, with private gatherings limited to 10 people from no more than two households. Chancellor Angela Merkel has pushed for a tightening of these rules, but admitted last week that she does not have the necessary backing from state leaders to do so.

Protests against the partial lockdown have broken out in cities across the country, with some gatherings drawing counter-protesters and police deploying tear gas and water cannons.

Germany still struggles to atone for its Nazi past, and criminalizes Holocaust denial and National Socialist symbols and insignia. Yet politicians and activists there are apparently as keen as anywhere else to fling Nazi comparisons at their opponents, particularly as the government limits liberty in the name of fighting the coronavirus.

The right-wing Alternative for Germany (AfD) party has compared Merkel’s new lockdown-enabling Infection Protection Law to the 1933 Enabling Act, which granted Adolf Hitler the power to rule by decree. Anti-vax protesters have used Nazi-era Stars of David at their demos, while left-wing counter-protesters have marched against the “Corona deniers and Nazi pigs” on the sceptics’ side.

Maas has been busy sniping at anyone making such comparisons. Shortly after the AfD compared the lockdown legislation to the Nazi-era Enabling Act, he tweeted that “whoever makes such opprobrious comparisons mocks the victims of National Socialism and shows that he learns nothing from history.” 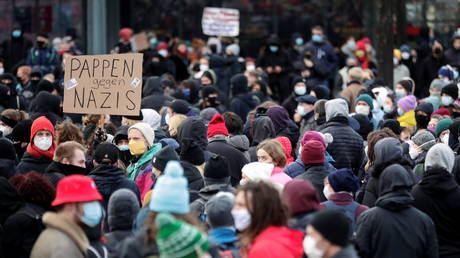