A massive planned demonstration against coronavirus lockdowns and social control measures planned for Saturday in Berlin is back on, after a German court overturned an earlier ban, arguing it lacked valid legal grounds.

The Berlin Administrative Court has ruled Saturday’s Assembly for Freedom protest, expected to draw upwards of 30,000 participants, can go forward as planned, arguing that the government’s stated rationale for the ban – an imminent threat to public health and safety – was baseless. The decision, handed down on Friday, is being appealed by Berlin police.

March organizer Michael Ballweg hailed the repeal as “a success for our basic rights,” though he suggested permission was not the government’s to give. “It is our basic right to be able to assemble,” Ballweg’s group, Querdenken (‘lateral thinking’) 711, wrote to participants via Telegram before the court decision was handed down.

By Friday morning, Berlin police had been deluged with 5,000 more applications for demonstrations, a spokeswoman told the DW news channel, and Querdenken 711 urged supporters to apply as many times as possible. “It’s impossible to cancel all these demos across the board,” they argued.

Berlin interior minister Andreas Geisel had officially cited “protection against infection” as the reason for banning the event, arguing that participants in the Day of Freedom rally earlier in August – also organized by Querdenken 711 – had failed to respect social distancing or wear masks. The court countered Geisel had presented no evidence that the ‘hygiene plan’ submitted by march organizers for Saturday would not be followed.

Critics of the ban had also pointed out that the real motives for spiking the march appeared political, observing Geisel had not minced his words in denouncing the protesters as science-hating neo-Nazis. “I am not prepared to accept a second time that Berlin is being abused as a stage for corona deniers, Reich citizens and right-wing extremists,” the Social Democrat politician declared, on announcing the ban on Wednesday.

He doubled down on that characterization in interviews following the controversial decision, claiming demonstrators had leveled “massive” threats of violence against his office, and insisting they hailed “from the right-wing extremist spectrum with a considerable potential for aggression.”

While certain marginal factions had indeed reacted to the ban with rage, calling for those responsible to be executed, their invective was limited to the online arena, and Ballweg stressed that the march should remain peaceful. In a press release, he warned that the government had confirmed his deepest fears that coronavirus control measures were being used to sneak in a totalitarian police state.

Geisel and others who favor the Covid-19 controls have attempted to tar all protesters with the right-wing-extremist brush, but some participants in the anti-lockdown demonstrations have argued their efforts are not political. Many fear the imposition of a mandatory unsafe vaccination regime, and Microsoft founder turned pharmaceutical evangelist Bill Gates has become a particular target of their ire. Participants in the Day of Freedom march also claimed their fellow demonstrators numbered in the millions, rather than the 20,000 reported in German media.

The right-wing AfD party demanded Geisel’s resignation following the repeal of the protest ban, denouncing his “brazen attempt” to suppress Germans’ freedom of expression, which is guaranteed by law.

A number of counter-protests are planned against the Assembly for Freedom, including by the Berlin Alliance against the Right, which will march under the banner “No place for Nazis.” Geisel did not attempt to ban those demonstrations. 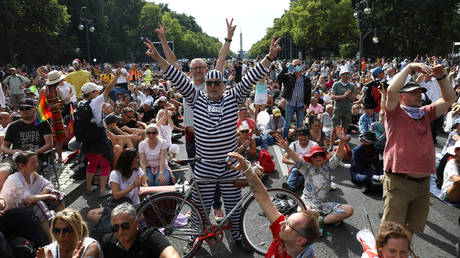 France tells EU to stick to its gu...