Health authorities in the Palestinian territory have imposed a lockdown after four people tested positive for Covid-19 at a refugee camp. Shops, mosques and schools were ordered to close in a bid to contain the transmission.

The four coronavirus cases were confirmed within a single family in a refugee camp, government spokesman Salamah Maarouf said on Tuesday. The local outbreak is the first in the coastal enclave not to involve any of the 110 people already quarantined in border facilities after crossing into Gaza from Egypt and Israel.

The cases were recorded after a woman – apparently belonging to the family in question – travelled to the Israeli-occupied West Bank, where she tested positive for the contagion, Reuters reported, citing Gaza’s Health Ministry.

Officials are tracing her contacts in an attempt to stem the transmission of the virus, which could deal a severe blow to the crisis-stricken Palestinian territory, home to some two million people.

The lockdown measure has already seen workplaces businesses, mosques and schools shut down throughout the Gaza Strip as of Monday. The order will remain in force for the next 48 hours, with Hamas – the militant group which governs the enclave – urging people to abide by the lockdown.

This is a potentially disastrous development for the densely populated Gaza Strip, whose fragile healthcare system has been suffering from a de-facto Israeli blockade for years. That aside, Gaza faces acute electricity shortages, with its sole power plant shut down last week after Israel stopped allowing supplies amid an uptick in cross-border skirmishes with Hamas. 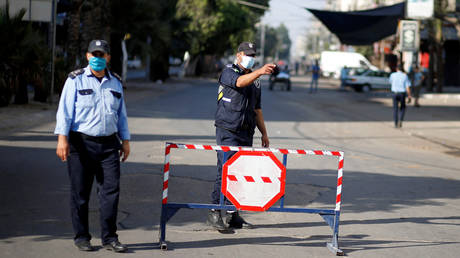