Billionaire vaccine evangelists Bill and Melinda Gates have topped off the global effort to roll out a shot against the novel coronavirus as some question the vague clinical trial results of the Gates-funded Pfizer jab.

The couple’s foundation will pour $70 million more into the vaccine development and distribution effort, they announced on Thursday in a press release, adding that Melinda Gates would make the official statement during the Paris Peace Forum.

The pair have earmarked $50 million for COVAX – an international effort to ensure 92 “low- and middle-income countries” have access to the experimental jab(s) – and $20 million for the Coalition for Epidemic Preparedness (CEPI), which is supposed to “jumpstart the development for an additional slate of promising vaccine candidates.”

Despite stumping relentlessly for a shot against the novel coronavirus over the past nine months and revealing he hopes to inject all 7 billion humans on earth with it, Microsoft founder Bill Gates appears to have shifted his attention from the current crop of vaccine candidates to the next, arguing the second-generation jabs will have “greater potential for large-scale manufacturability, temperature stability, and low-cost production.”

The timetable for that vaccine – and with it, the much-hoped-for return to “normal” – has apparently stretched further into the future, with Gates hinting on Thursday “we still have a long way to go” despite suggesting “rich countries” could return to their pre-Covid-19 state by the end of 2021 just last month. Foundation CEO Mark Suzman seemed to agree, stating that “ending this pandemic will require the largest public health effort in history” – even as a growing body of statistical evidence suggests Covid-19 is hardly the world-ending mass killer it was initially presented as in the Gates-funded media.

The Microsoft magnate is wholly prepared to take on this ‘challenge,’ however, having recently celebrated the wholesale cooption of UK health policy through PM Boris Johnson and his country’s turn at the helm of the G7 – during which a global “health security” regime is to be unveiled that will give the Gateses even more power than they already have as the top donors to the World Health Organization.

Gates’ detractors have accused the couple’s foundation of using third-world populations as “lab rats” for experimental compounds, and pockets of resistance have sprung up in South Africa as vaccine trials conducted by the Gates-backed Gavi (a partnership between the Gates Foundation, the WHO, and the World Bank) have taken place in that country. Gavi’s stated purpose is increasing vaccine uptake in poorer nations.

Pharma giant Pfizer earlier this week declared that its Covid-19 vaccine – heavily funded by Gates – was 90 percent effective, though the company has not released the results of its clinical trials and some medical experts are skeptical due to the small sample size and absence of details surrounding any aspect of the supposedly successful trial. The billionaire hinted back in September that Pfizer would be the first drugmaker to seek emergency FDA authorization for its jab, which has been developed in partnership with BioNTech. The company’s jab relies on an mRNA mechanism to trigger an immune response, a model that has never been used in any other vaccine approved for human consumption.

While the UK’s National Health Service is already winding up its military to deliver the Pfizer shot and the US has also declared its military will be on standby to deliver the Covid-19 jab before the end of the year, no western country has yet approved a vaccine against the coronavirus. Russia’s Sputnik V vaccine has received emergency authorization and its manufacturer has begun filling orders outside the country, while multiple Chinese vaccine candidates have also received emergency authorization. 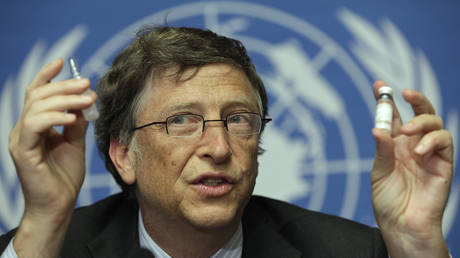 China about to pull off ‘diplomati...