From airport to vaccination hub: Berlin retrofits closed down facilities to fight Covid-19

From airport to vaccination hub: Berlin retrofits closed down facilities to fight Covid-19

Berlin authorities are breathing new life into the German capital’s shut down airports as two facilities have been chosen to house coronavirus vaccination centers expected to service thousands of people a day.

Berlin’s long standing Tegel Airport that served as one of the gateways to the city for 60 years was permanently shut down in early November.

Now, a large ‘welcome’ sign still hanging over its entrance will get an entirely new meaning as Tegel’s Terminal C is about to become one of Berlin’s six coronavirus vaccination hubs.

“We will be vaccinating 3,000 to 4,000 people a day,” Albrecht Broemme, the man in charge of Berlin’s vaccination hubs construction project, told AFP, speaking of the future capabilities of the airport.

Tegel, however, will not be the only such facility used for vaccination as a similar center is scheduled to be set up at Tempelhof – another former airport closed back in 2008 that has already served as a velodrome, a refugee center and an ice rink.

Berlin expects to get some 900,000 jabs from America’s Pfizer and Germany’s BioNTEch companies in the first batch. Since any person would need to get the jab twice, that would be enough to vaccinate some 450,000 people out of a 3.7 million-strong city population.

The city authorities plan to start the vaccination campaign by the end of the year. “We are preparing for December as the earliest possible date,” said Berlin Health Minister Dilek Kalayci. She also said that the combined capacities of six hubs would make it possible to vaccinate 20,000 people a day.

“The general idea is to vaccinate as many people as possible one after the other,” Broemme, 60, said, adding that people’s safety and social distancing measures would still be of great importance during the vaccination.

It would be a nightmare for me if people were to become infected when they came to be vaccinated.

The former firefighter added that he devised the Tegel hub setup by using a set of Lego and building a model of the terminal. Under his plan, each visitor is expected to follow a designated route from registration to a jab booth and then to a consultation with a medic and the final checkup. “We imagine that all of this will take an hour,” he said.

For now, the efforts are focused on outfitting the place and taking the necessary security measures. The terminal has been sealed off with metal fencing and barbed wire. Broemme also expects ample security staff to be recruited to be ready in case anti-vaccination activists try to block access to the facility or disrupt its work.

Recruiting doctors, nurses as well as logistics and support staff is also an issue. According to the Berlin authorities, the six hubs still lack a total of more than 1,000 staff members. Yet, Broemme said there is no shortage of applications.

Medical staff in Germany is already in short supply, so the authorities plan to hire retired nurses, medical students and even flight attendants for the job. Preparations for the vaccination campaign are in full swing in Germany. The western – and the most populous – state of North Rhine-Westphalia plans to set up 53 vaccination centers while the largest and the second most populous state of Bavaria expects to open as many as 96.

Germany’s Health Minister Jens Spahn insists vaccination would be voluntary while Chancellor Angela Merkel pins high hopes on the campaign, expecting “significant progress next year” in the fight against coronavirus.

Earlier, the chancellor already described the nation’s partial lockdown that has been recently extended till December 20 as “partial success.” The number of new infections, however, continues to slowly go up.

On Friday, 22,806 new cases were recorded across Germany, up from 18,633 reported on Wednesday, according to the Robert Koch Institute. The nation also saw a record single-day increase in coronavirus-linked deaths, 426. 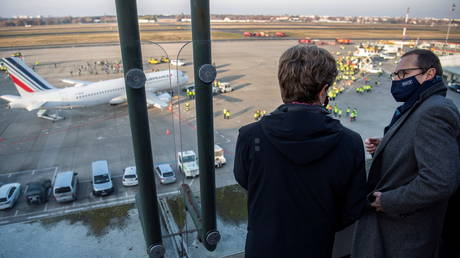