Disturbing new footage of a Belgian cop pressing his full weight onto a Slovak man who died after the arrest in 2018, and the frivolity of his colleagues, has appalled many online, who likened it to the death of George Floyd.

Harrowing scenes of Jozef Chovanec, a 38-year-old Slovakian, being forcefully restrained by a handful of Belgian police officers went public this Wednesday, after it was initially released by Het Laatse Nieuws, a local Dutch-speaking media outlet.

The businessman, who frequently commuted between his country and Belgium, ran into trouble back in February 2018 after causing a disturbance on his flight from Charleroi airport. Staff called the police, who placed Chovanec into a crammed cell at the airport police station, where the tragedy subsequently unfolded.

Seemingly agitated, Chovanec is seen violently banging his head against the wall in the footage. A squad of cops burst into the cell, overpower him, and pin him down on the floor. The officers don’t seem worried about the inmate’s condition; some look joyous and laugh as their female colleague briefly makes a Nazi salute.

Another officer was filmed putting their full weight on Chovanec’s rib cage for about 16 minutes. The video then jumps to a point when officers are trying to revive the Slovak, who is lying lifeless on a bench.

Chovanec was rushed to the hospital, where he went into a coma and died the next day, officially from cardiac arrest. The harrowing footage has been making rounds online since it was published, with Belgian users expressing both outrage and shock when commenting on the video.

Among them was the current mayor of Charleroi, Paul Magnette, who said the way the officers behaved was “unacceptable,” demanding that law enforcers “shed light on these actions.”

Contacted by HLN, Chovanec’s widow likened the incident to the killing of George Floyd, the black Minnesotan who died after a local police officer knelt on his neck for almost nine minutes – half as long as the Charleroi officer back in 2018. Floyd’s death earlier this year sparked massive nationwide rallies in the US, with the protest focusing on police brutality and the black community’s grievances.

“When I saw the videos of Floyd’s arrest, I immediately thought: my husband died the same way,” she told the outlet. The woman recalled that her spouse didn’t seem unwell before the flight from Belgium, but something went awry in detention.

Belgian officers “ignored my husband all night,” she insisted. “He couldn’t breathe properly. Everything went wrong here, from beginning to end.” Still seeking justice, the widow claims the police inquiry into Chovanec’s death has been delayed and facts have been covered up.

Later on Wednesday, government officials gave their take on the new footage. Interior Minister Pieter de Crem called the incident “something out of proportion,” while Justice Minister Koen Geens acknowledged that the investigation has been slow due to the Covid-19 pandemic.

Meanwhile, the policewoman believed to have performed a Nazi salute has been suspended from duty. “She should no longer have contact with the public,” a federal police official stated on Wednesday. 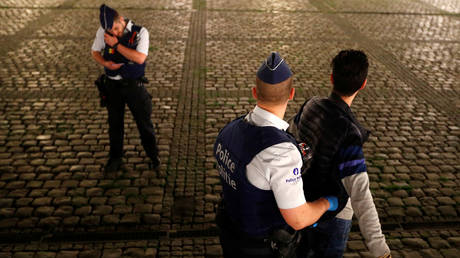