Top diplomats from Athens and Ankara met in Slovakia as the two nations aim to put their issues aside. It’s the first sign of action since Turkish President Erdogan said he was willing to meet his Greek counterpart in September.

Turkish Foreign Minister Mevlut Cavusoglu and Greek Foreign Minister Nikos Dendias met on the sidelines of the Global Security Forum in Bratislava, the Slovak capital. The atmosphere was reportedly jovial as the two ministers, wearing masks, bumped elbows and stood talking over a poseur table.

Cavusoglu took to Twitter to confirm reports that the two parties had agreed to further “exploratory talks” and would be looking at “confidence building measures.”

Met w/FM @NikosDendias of #Greece on the sidelines of #GLOBSEC2020 in #Bratislava. Will determine dates of Exploratory Talks and meetings for Confidence Building Measures in the coming days. pic.twitter.com/29pnssDxUm

The Greek foreign minister also confirmed the meeting on Twitter, sharing a photo of the pair.

I met with Turkey FM @MevlutCavusoglu on the sidelines of #GLOBSEC2020 #Bratislava pic.twitter.com/n2aLE6INhx

The next round of exploratory talks would be the 61st attempt to reduce tensions between the two neighbors. Previous meetings took place over the course of 14 years until they were put on ice in 2016.

Whilst the Eastern Mediterranean countries have rarely seen eye to eye on a number of matters, tensions heightened in 2020 as the two nations locked horns again over hydrocarbon exploration and territorial rights. Greece, with EU support, accuses Turkey of illegal exploration activities and of obstructing licensed drilling vessels.

This year has also seen the age-old foes continue their quarrel over migrant crossings to Greece.

In September, Turkey withdrew its exploration vessels from disputed waters, allowing for diplomacy to take place ahead of meetings with EU leaders. The EU has said it would continue to punish Turkey if it persisted with its hydrocarbon operations in contested waters. 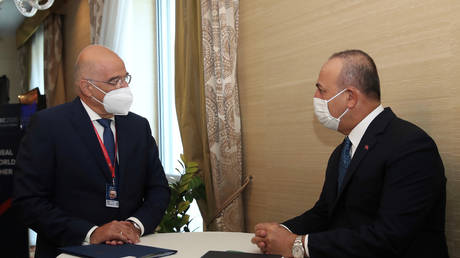