A man from the Brittany region of France has been detained and fined for violating Covid lockdown rules after claiming “smash a guy’s face in” was his justification for leaving home.

The police said it wasn’t an essential reason. Police in the town of Lannion discovered someone hiding suspiciously behind a car early on Saturday.

When asked to explain his behavior, the man, who had reportedly been drinking, said that he was waiting for someone, so as to “smash his face in.”

He was carrying a flick knife and a completed form that is required of anyone who goes outside during the country’s current lockdown. Leaving home is only allowed for essential reasons which must be detailed on the form.

The filled out paperwork contained the 39-year-old’s real name and the time he had left his apartment, officers said.

“In his own way, he was trying to fulfil the letter of the law,” Daniel Kerdraon, a local police commander, told AFP. The officer added that the detained man was told that his reason for going out was “not valid.”

The troublemaker was fined €135 for violating lockdown rules and another €150 for drunken behavior. He was released after spending a night at the police station, but ordered to return later for  questioning over the knife found in his possession. 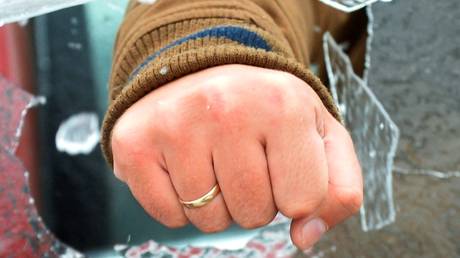