Police officers were pictured taking off their helmets to cheers from the crowd at an overnight protest in Paris sparked by the so-called Global Security Bill, which makes it illegal to distribute pictures of law enforcement.

The symbolic gesture was met with applause from the demonstrators, footage from the scene shows. Multiple officers removed their helmets, putting on soft service hats instead.

Other police and gendarmerie officers, however, were not that cooperative and refused to take off their helmets. Some were seen pushing aggressively against the crowd and reporters, refusing to be filmed.

Another powerful scene occurred when police deployed a water cannon truck against the protesters. The large machine was confronted by a lone wheelchair-bound protester, and the police were apparently hesitant to remove him from the truck’s path. However, he ultimately backed down on his own.

The protest, held at the Trocadero Square near the Eiffel Tower, was organized by Amnesty International, Reporters without Borders and other rights groups and journalist unions. The gathering was largely peaceful, yet after dark some protesters got rowdy and set various objects on fire, invoking a police response. A total of 23 people were arrested and a police officer was slightly injured during the scuffles, Paris police said.

The Global Security Bill, pushed forward by the French government, was passed by the National Assembly on Friday and is expected to be approved by the Senate next week. Among other things, it criminalizes the distribution of images of law enforcement, both by the media and the public. Violation of this new rule could result in a hefty fine of up to €45,000 (around $53,400) or a one-year prison sentence.

While the legislation came under a storm of criticism as a gross violation of freedom of speech, the French government insisted it was needed to protect the officers from images shared with a clear intent to “harm” them. 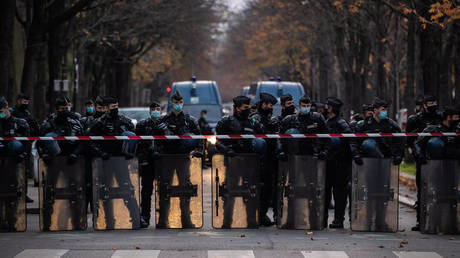