French officials cannot use drones to make sure citizens are following curfew, staying apart, and wearing masks, the nation’s privacy watchdog has said. It’s the third such dressing down for police in eight months

The CNIL told the Interior Ministry, which oversees both the National Police and the Gendarmerie, that there aren’t any laws which allow them to use drone cameras.

The ministry said in a statement it would abide by the CNIL rules. But it’s not the first time French officials have fallen foul of privacy advocates for using drones to spy during coronavirus lockdowns. In May, France’s top administrative court ruled that Paris police using drones was unlawful and broke privacy rules.

The privacy watchdog complained that police didn’t use blurring technology when filming people on the streets or taking part in protests. People could be easily identified in images kept by police, CNIL said, and this broke French data privacy laws. The Interior Ministry said that blurring systems were in place, but CNIL was concerned they could be switched off.

And in December, the Council of State ordered the chief of Paris police to stop using drones to video people gathering at protests or on the streets.
A new security law now before the French parliament would give police power to pass video from drones or helicopters to command teams on the ground, and those images could be stored for 30 days or longer for use in police investigations.

The Council of State said, however, that there was serious doubt over how the images would be used.

When it comes to Covid-19, police began using drones to crack down on rulebreakers after French authorities imposed a national lockdown on March 18.

The latest set of lockdown restrictions in France include a curfew in cities and towns between 8pm and 6am, and people are only allowed to leave their homes under strict conditions. There is a €135 fine for breaking the rules.

On the first day of the French lockdown, police issued more than 4,000 fines. Within two weeks, some 350,000 people were fined for breaking the rules.

In one instance in April, a 73-year-old woman with dementia was fined €166 for filling out the wrong date on an official form that had to completed before leaving home.

Some 2.8 million cases of Covid-19 have been reported in France so far, and nearly 70,000 people have died from the virus. 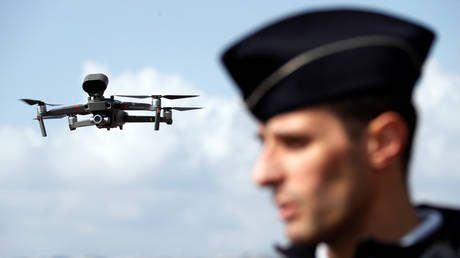