Speaking on the anniversary of the deadly Beirut port blast, France’s Emmanuel Macron criticized the country’s political class for a “moral failure” that has allowed the nation to fall further into social and economic crisis.

The French leader’s remarks came at the opening of an international fundraising conference, which seeks to secure at least $350 million to help the trouble-struck country recover.

Despite the international effort to help the nation address the turmoil exacerbated by the August 2020 Beirut blast, Macron warned that any fundraising would not be presented as a “blank cheque for the Lebanese political system” until officials address their own failures.

Lebanese leaders seem to bet on a stalling strategy, which I regret and I think is a historic and moral failure.

The explosion in August 2020 destroyed large sections of the former French colony’s main port city, killing more than 200 people and injuring over 7,500. The fallout from the blast resulted in the resignation of the incumbent government, creating a political void that has not been filled, with no new permanent government formed in the 12 months that followed.

Lebanon’s president, Michel Aoun, who appeared at the videoconference event, reiterated Macron’s concerns about the failure of the acting government that was appointed with the hope of stabilizing the nation. Calling for unity domestically, Aoun urged officials to work together while Lebanon “is currently going through the hardest times.”

Last week, Aoun appointed businessman Najib Mikati as the new prime minister-designate after former Acting Prime Minister Saad Hariri resigned, having failed to break the political deadlock in the country. Following his appointment, Mikati addressed the international offers of help, stating “with the cooperation of the president, we will form a government according to the French initiative.” 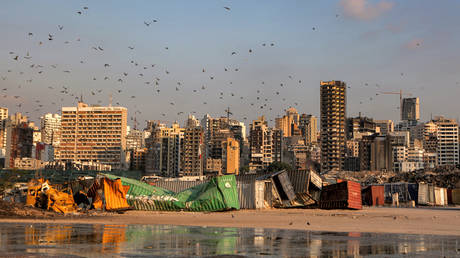