Police in Paris have cleared out a temporary migrant camp set up in the middle of the French capital, clashing with pro-migrant protesters. The demonstrators say the migrants set up the camp to demand accommodation.

Rows of identical tents sprung up on the Place de la République in central Paris on Monday.

The camp was organized by Utopia56, a migrant advocacy group, who say that the 450 or so migrants in the encampment were left homeless when police cleared 2,000 migrants from a shanty town in the suburb of Saint-Denis last week.

Riot police soon arrived on the scene and started dismantling the pop-up camp.

The sweep didn’t go completely smoothly. Those who refused to leave were muscled out by the riot cops, while pro-migrant protesters who came between the police and the tents were met with batons and shields. Actu reported that some members of the Council of Paris were present, and tried to stop the clearout.

Utopia56 has demanded that the French government provide “1,000 immediate accommodation places” for homeless migrants, and called on the state to set up a “permanent reception system” to house more entering the country.

The total number of illegal migrants living in Paris is unknown. A migrant rights group last year estimated that 2,000 were sleeping on the streets of the French capital, while a 2018 government report claimed that between 150,000 and 400,000 were living either homeless or in accommodation in the suburban region of Seine-Saint-Denis alone. 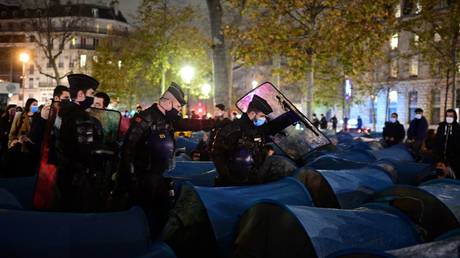 Who has the most followers on TikT...

Universities must hold lessons in...