Police on Tuesday dismantled a camp of at least 700 migrants in the French port city of Calais, the biggest such operation since the ‘jungle’ shantytown was broken up four years ago.

Police officers began the operation before sunrise on Tuesday, and some 200 people had been removed in the first two hours. Some 21 migrants were arrested, according to local authorities.

“We want to avoid a concentration and a new gathering point in Calais,” Louis Le Franc, the government’s top official for the northern Pas-de-Calais department, told reporters at the scene. It was the biggest dismantling of a Calais camp since the ‘jungle’ was cleared of some 9,000 migrants between 2015 and 2016, according to the official.

The majority of the migrants and would-be asylum seekers in the camp are men, mainly from the Middle East and Africa. Authorities plan to send about 150 of the evacuated people to reception centers in Pas-de-Calais. Also, 150 migrants will be brought to other departments in northern France, and the remainder to other regions in the country.

Le Franc claimed that the operation was above all to give people a safe haven before the winter period because the migrants “are living in this forested area in extremely difficult conditions.”

Migrants see the Calais camp as a launch point to cross the English Channel for Britain. People traffickers help them to get to the UK in small rubber boats or in trucks and cars that travel between the two countries on ferries and trains.

London has repeatedly demanded that the French government take more steps to prevent the migrants leaving France, calling the high numbers who made the illegal crossing this summer unacceptable.

French authorities say they have intercepted at least 1,317 migrants since January 1, as they tried to reach Britain’s shores. 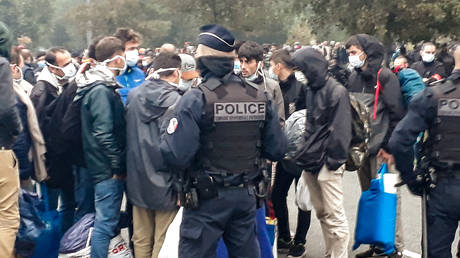