The French parliament has approved a bill to further tighten requirements for mandatory Covid-19 vaccinations and health passes in response to the Delta variant. The new constraints come amid mounting protests in France.

The new restrictions in Monday morning’s bill mean that French health workers will be obligated to receive the vaccine. The need for health passes will also be imposed across more areas of society, leaving fewer social activities and transport options available for those who are opposed to the jab.

Monday’s bill means that the health pass – a vaccine passport or a negative test – will be required in bars and restaurants, on long-distance train journeys, and on flights.

Prior to the measures approved on Monday, President Emmanuel Macron had already applied the health pass to museums, cinemas and swimming pools, following the spread of the Delta variant in early July.

The bill still needs final approval by France’s Constitutional Court – a body to whom many protesters are appealing for the protection of their ‘droits de l’homme’, or human rights.

On July 24, protests across France intensified in opposition to Macron’s health pass, which many claim is a coercive move to force people into taking the vaccine. There were 160,000 people protesting across the country on Saturday, chanting “liberty, liberty!”

Signs that read ‘Down with the dictatorship’, in reference to Macron’s measures, were also seen.

The demonstrations, which have been active since the start of July, are rapidly growing in strength, with the recent protests boasting some 50,000 more people than those held a week ago.

One of the major protests on Saturday, organized by French nationalist party Les Patriotes, took place at the Trocadero Square in Paris and appealed for more freedom and human rights.

Similar protests kicked off around Europe on Saturday, namely in Rome and Athens, where people opposed the vaccine.

According to the official data, 60% of adults in France are now fully vaccinated.

Since the start of the pandemic, France has recorded 111,806 Covid-19 deaths. 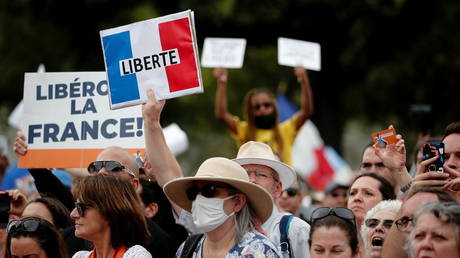 You can spot HUGE fireballs soarin...