A senior French ISIS member, who converted to Islam at 21, has been locked up for 30 years. It’s the first time a Paris court has imposed a sentence for jihadist crimes committed in Syria.

Tyler Vilus, 30, was found guilty of aggravated murder, being a member of a terrorist group, and heading up a group of Islamic State (IS, formerly ISIS) fighters in Syria.

The homegrown terrorist is believed to have been part of the Al-Muhajireen (the immigrants) brigade of foreign jihadists that carried out executions and torture, which he denied. Vilus was found to have overseen executions as a member of the religious police in the Syrian town of Ash Shaddadi.

A 2015 IS propaganda video shown in court features a man believed to be Vilus standing close to two blindfolded prisoners, a member of the Syrian Army and a Free Syrian Army fighter, who are shot in the head.

Public prosecutor Guillaume Michelin said that Vilus “hasn’t changed one bit” since his time in Syria. He asked the court to give him a life sentence with no chance of parole for 22 years, calling on the court to “put a definite end to the bloodshed.”

“All the steps in the accused’s journey are interlocked with the construction of the caliphate,” he said. The judge, however, said that he wanted to give Vilus a “glimmer of hope.” Vilus’s case is the first successful French prosecution of an Islamist militant for crimes committed in Syria.

Vilus was arrested at an Istanbul airport in July 2015 with a Swiss passport. He left France for Syria in 2012, not long after converting to Islam when he was 21 years old. He is thought to have known many French jihadists who were fighting in the so-called Caliphate. The IS fighter admitted to being in contact with Abdelhamid Abaaoud, who is understood to be the mastermind of the November 2015 terrorism attacks in Paris.

His mother, Christine Riviere, dubbed ‘Mama Jihad’ by the French media, was sentenced to 10 years in prison in June 2017 for her “unfailing commitment” to jihad. She visited her son in Syria three times and helped bring young girls there in an effort to find him a wife. 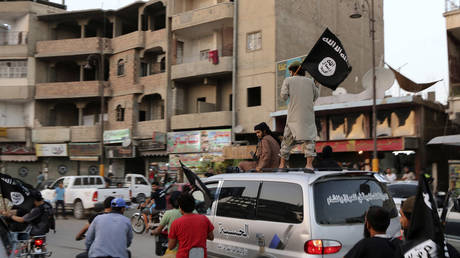