The French government has signaled that it will consider all possible strategies purportedly aimed at containing a spike in coronavirus cases, including curfews, as President Emmanuel Macron’s cabinet debates new restrictions.

French ministers are scheduled to meet on Tuesday to discuss further measures as cities across the country register record levels of positive Covid-19 tests. Macron is expected to give a televised address announcing any decisions made during the meeting on Wednesday.

When pressed on whether Paris and other hotspots could be placed under curfew, Marlene Schiappa, a deputy minister responsible for citizenship, said that no options could be ruled out.

“Everything is being examined. Nothing can be excluded,” she told French television channel LCI.

Her comments mirror earlier remarks made by Prime Minister Jean Castex, who said “nothing could be ruled out” amid concerns of a growing number of Covid-related hospitalizations.

Castex said that localized stay-at-home orders were also being considered, and he expressed hope that “it should be possible” to avoid a nationwide lockdown.

Eight French cities, including Paris, have been placed under maximum alert due to an increase in coronavirus cases. The high alert status means that bars must close their doors for two weeks, among other measures.

France reported 8,505 new positive Covid-19 tests over the past 24 hours on Monday, a considerable decrease from Saturday’s record of 26,896 new cases. However, the number of patients being treated for the virus in intensive care units exceeded 1,500 on Monday for the first time since May 27, health officials announced. 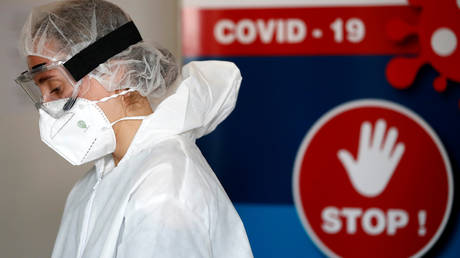