French govt backs harsher penalties for people who attack police, as it pays tribute to latest officer killed on duty

French govt backs harsher penalties for people who attack police, as it pays tribute to latest officer killed on duty

Under pressure from police unions, French PM Jean Castex has proposed tougher measures against those who attack the police, just ahead of a ceremony to honor the latest officer killed in a shooting last week.

Following a meeting with police union leaders on Monday, Castex took to Twitter, pledging “more severe punishment” in cases of “violence against the internal security forces.”

Among the proposed measures announced by the PM is a guaranteed 30-year prison sentence for killing an officer, matching the punishment for terrorists. Measures would also be introduced to allow faster prosecution and the ability to reduce a sentence will be more strictly limited.

President Emmanuel Macron has also promised to put 100,000 more police officers on the streets by the end of his term and pledged to increase the police budget.

The measures, however, don’t meet the unions’ demand to abolish a possible reduction in sentences altogether. French media have quoted the unions as saying that without such a measure, nothing will change.

Castex led a ceremony on Tuesday in the southern city of Avignon to honor officer Eric Masson, 36, who was killed last week in an apparent drug-related shooting. Four people have been arrested and the investigation is ongoing.

Masson’s death became the latest in a series of attacks against members of the French security forces. Castex promised €10 million ($12 million) to reinforce security at police stations after a female police administrative official was killed at her workplace in a Paris suburb in April in what authorities called an Islamic extremist attack.

Police unions and officers have been protesting and demanding change and higher protection since last year. 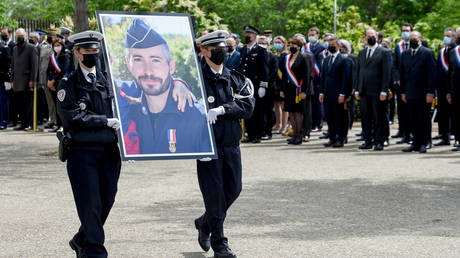