Also known as Bamoussa Diarra, the former Malian army colonel was considered the right-hand man of Iyad Ag Ghali, the leader of the most prominent jihadist group in Mali.

Moussa was on the US terrorism list for organizing numerous attacks in the region. He was killed on Tuesday in an operation that involved ground troops and helicopters, according to the military.

Parly described the operation of the French military as “a major success” in the fight against terrorism. “A historic figure of the jihadist movement in the Sahel, Bah ag Moussa is considered responsible for several attacks against Malian and international forces,” the minister said in a statement.

The group, called Jama’at Nusrat al-Islam wal-Muslimin (JNIM), has been accused of attacking soldiers and civilians in Mali and neighboring Burkina Faso.

France, a former colonial power, has deployed over 5,100 personnel across the region with a large portion in Mali.

The French-led Operation Barkhane has recently stepped up the fight against Islamist extremists in West Africa. During airstrikes on October 30, more than 50 jihadists were “neutralized” in Mali, Parly said.

The minister met in early November with the head of the transitional government in the Malian capital, Bamako. A military junta ousted the country’s president in August, but it promised to hold democratic elections “as quickly as possible,” according to the French minister.

President Emmanuel Macron said this summer that France could restructure Operation Barkhane by the end of the year, and military sources say France could withdraw several hundred troops from its contingent. 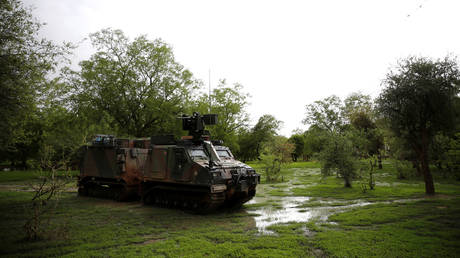