A parish priest and another clergyman have been arrested in Paris after breaking not just bread, but also France’s Covid-19 rules, by holding Easter mass for up to 280 worshipers, many of whom were not wearing face masks.

The pair were detained on Thursday over the service at the Saint-Eugene-Sainte-Cecile church in Paris on April 3, and an investigation into the incident has been launched, according to French broadcaster BFM TV. Prosecutors confirmed the arrests to local media.

The clergymen’s alleged Covid-related breaches include “deliberately endangering the life of others,” “not wearing a mask,” and holding a “gathering of more than six people.”

A spokesperson for the diocese confirmed that 280 people had been present in the 600-capacity building, and that an internal investigation led by the archbishop has been launched.

As the Easter service began, the rules of France’s third national lockdown – including a ban on gatherings of more than six people – had already come into force.

The strict measures were imposed in response to climbing intensive care admissions for Covid-19 patients, and are due to last for four weeks from April 3. 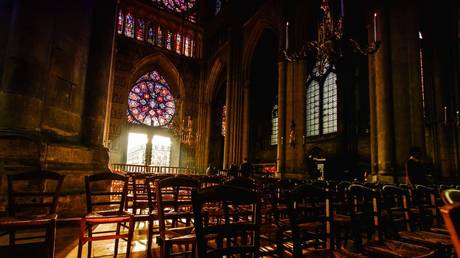