The threat of terrorism is a European reality that needs a coordinated and quick answer, French President Emmanuel Macron warned on Tuesday. He also raised his previous proposals for a new European internal security council.

In light of recent terrorist attacks in both France and Austria, European countries must work on a re-think of the open-border Schengen area, Macron said in Paris.

Europe wants to keep its borders open, but wants to better protect its external borders, the French leader added. Macron’s statement follows talks with Austrian Chancellor Sebastian Kurz at the Elysee Palace near Paris where the two leaders discussed the fight against Islamist extremism.

France suffered two terror attacks in October, including the beheading of a schoolteacher who had shown cartoons of the Prophet Muhammed to his class, and the killing of three people at a church in the southern city of Nice.

In the Austrian capital Vienna, a jihadist killed four people on November 2. The attacker had traveled to neighboring Slovakia in July in an attempt to buy ammunition, according to Austrian officials.

Macron had earlier urged tighter border controls as part of the effort against extremism, pointing out that criminals trafficking migrants have been linked to terrorist networks.

At stake now is the protection of the external borders, not a limitation of the right to asylum, Macron added on Tuesday.

The French president also spoke in favor of setting a European “internal security council” – an idea he has raised before – and insisted that the creation of “common databases” might be part of a response to the terrorist threat. 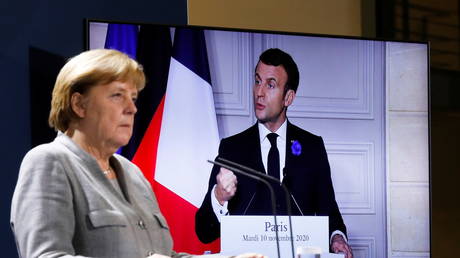 Biden claims he was Israel ‘li...