Interior Minister Gerald Darmanin has announced an investigation after ‘shocking’ images circulated on social media of violent clashes, as police broke up a migrant camp in a central Paris square.

I have just demanded a detailed report on the reality of the facts from the prefect of police by midday tomorrow. I will take decisions as soon as I receive it.

Police were sent in to disperse the gathering after charity Utopia 56 asked 450 refugees to set up tents in the square to protest the forced dismantling of a migrant camp several days earlier in Saint Denis, a suburb of the capital.

Footage showed police attacking reporter Remy Buisine, who works for French news site Brut, while he was trying to cover the clashes. Buisine claims the same police officer targeted him three times despite his having shown a press pass.

Journalist @RemyBuisine knocked to the ground. According to his testimony, this is the third time in the same evening that he is struck.

After the incident, Brut stated that it would be demanding explanations from the police prefecture and the Ministry of the Interior.

Before he was targeted, Buisine had posted videos on Twitter of police charging towards other reporters, threatening to arrest him and detaining a photographer for being in attendance during the skirmishes.

When the Saint-Denis camp was cleared on November 17, authorities said that migrants would be moved to reception centers and given shelter.

Utopia 56 claims that, instead, the government has forced the individuals who’d been living in the camp to sleep rough on the streets in and around Paris.

In order to address the situation, the charity has called on local authorities to immediately provide 1,000 places in shelters and to establish a permanent system for safely registering migrants.

Ian Brossat, the Deputy Paris Mayor responsible for housing, condemned the actions of police as crazy, pathetic harassment and asserted that the state has to work to find housing for homeless individuals in the country.

Despite the criticism, the police prefecture has defended the actions of its officers, arguing that the gathering of migrants in these camps is unacceptable and any illegal occupation will be immediately dispersed. 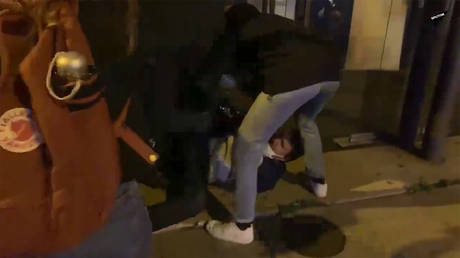