The French armed forces will pursue military operations against Islamic fighters in France’s former colony Mali, despite the ousting of the president two days ago by a coup, Paris has said.

“The Barkhane operation, asked for by the Mali population and authorized by the UN Security Council, continues,” France’s Minister of the Armed Forces Florence Parly tweeted on Thursday.

The previous day, France had demanded the immediate release of Mali’s president and his government officials, after they were detained during a coup led by soldiers on Tuesday.

“France acknowledges the announcement of President Ibrahim Boubacar Keita’s resignation. It calls for his immediate release … and for the restoration, without delay, of a civilian power,” French Foreign Minister Jean-Yves Le Drian said.

Mali’s Colonel Assimi Goita has presented himself as head of the junta that ousted the president, and the army’s spokesman sought to reassure citizens that daily life would resume as normal from Thursday.

The junta, which includes several other colonels, met government officials late on Wednesday to map out a “return to stability” in the country, which is already in the grip of a jihadist insurgency and civil unrest.

Concerns are growing that the coup could disrupt a military campaign against the jihadists, who are linked to Al-Qaeda and Islamic State (IS, formerly ISIS), which are operating in northern and central Mali and in West Africa’s wider Sahel region.

The 15-member Economic Community of West African States suspended Mali’s membership and closed all shared borders with Mali on Tuesday.

France has had around 5,000 troops in five West African countries since 2014, as part of Operation Barkhane. Supported by regional armies, they patrol the Sahel region, including Mali, where Paris intervened in 2013 against an Islamist uprising. The military deployment reportedly receives logistical support from the US Africa Command and intelligence from the US drone base in Agadez, Niger.

Prior to the coup, tens of thousands of Malians had taken to the streets regularly over several months to protest against the country’s corruption and extreme poverty, and the opposition coalition had called for the resignation of the president ever since April’s parliamentary elections. 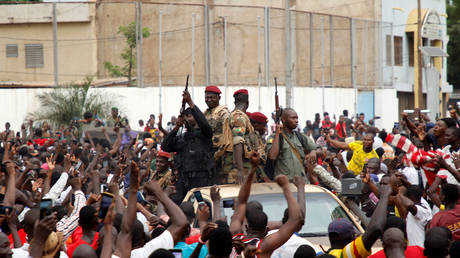