Paris has recalled its ambassadors from Washington and Canberra for consultations, citing the “unacceptable behavior” of the US, UK and Australia in striking a nuclear submarine deal that scuttled a French shipbuilding contract.

“At the request of the President of the Republic [Emmanuel Macron], I decided to immediately recall to Paris for consultations our two ambassadors in the United States and in Australia,” French Foreign Minister Jean-Yves Le Drian said on Friday.

Le Drian said the decision was justified by the “exceptional gravity” of the September 15 announcement made by Australia, the US and the UK.

Abandoning the submarine project that Canberra and Paris had agreed-on in 2016 constitutes “unacceptable behavior between allies and partners, the consequences of which affect the very conception that we have of our alliances, our partnerships and the importance of the Indo-Pacific for Europe,” said the French foreign minister.

US President Joe Biden, Australian Prime Minister Scott Morrison and his British counterpart Boris Johnson announced the ‘AUKUS’ initiative in a three-way virtual event on Wednesday afternoon. The centerpiece of this new alliance of “maritime democracies” is the 18-month project to provide Canberra with nuclear-powered but conventionally armed submarines. This would make Australia only the seventh country in the world to operate such vessels – and the only one without a nuclear arsenal of its own.

France reportedly found out about the deal from media reports, rather than from Washington or Canberra directly, although Aussie officials insist they’ve made it “very clear” to their partner that the French-Australian deal may be cancelled. Le Drian and Armed Forces Minister Florence Parly issued a furious statement in response to the unveiling of AUKUS, and the foreign minister later called it a “stab in the back.”

Macron’s initial reaction was to cancel a gala event at the French embassy in Washington, scheduled for the 240th anniversary of the naval battle that helped win the US war of independence.

Paris was not only cut out of the new Anglophone alliance, but lost the contract to provide conventionally powered submarines to Australia, valued at up to $66 billion. The French government has a majority stake in Naval Group, which worked on the contract. 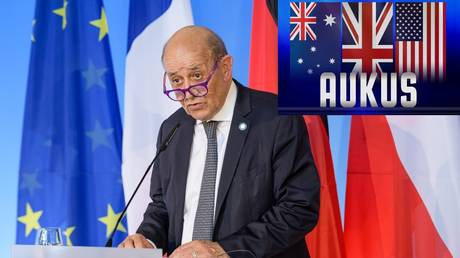 UFC legend Nurmagomedov ‘did not s...