France, not Turkey, plays ‘dangerous game’ in Libya by sending it into chaos – Ankara

France, not Turkey, plays ‘dangerous game’ in Libya by sending it into chaos – Ankara

Turkey has responded to President Emmanuel Macron’s claim that Ankara is dangerously shattering peace in Libya, saying in a tit-for-tat statement that it is France pulling the war-torn country into further chaos.

Paris, which supported “illegitimate structures for years” on Libyan soil is a major actor playing “the dangerous game” there, the Turkish Foreign Ministry proclaimed on Tuesday.

Advising Emmanuel Macron “to activate his common sense,” the ministry noted that the French had been supporting General Khalifa Haftar, who leads the Libyan National Army (LNA), for quite a long time.

The people of Libya “will never forget the damage France has inflicted on this country in line with its selfish interests and collaborators’ goals,” the fiery statement continued.

Striking a lighter tone, Ankara called on Paris to stop risking “the security and future of Libya, Syria and the Eastern Mediterranean” and start acting “on the basis of our friendship and allied relations.”

One day prior to Turkey’s rebuke, French President Macron said his country will not stand back and watch Ankara “playing a dangerous game in Libya.”

Macron insisted that Turkish involvement runs contrary to the outcomes of the 2020 Berlin conference, which endorsed a major ceasefire between Haftar’s LNA and the internationally recognized Government of National Accord (GNA).

Tripoli-based GNA forces, benefiting from Turkey’s sizable military support, gained the upper hand in the war with its rival LNA, backed by Egypt and a host of other nations. Recently, Paris accused Turkey of breaking an international arms embargo by funneling troops and equipment into the North African country.

The spat between the two NATO allies escalated last week after a French Navy ship tried to interdict a freighter suspected of smuggling arms into Libya. The vessel, guarded by a pair of Turkish frigates, refused to report its route while the escort ships highlighted the French one with their radars.

NATO then vowed to inquire into the mid-sea standoff, sure to produce more cracks in the relationships within the military alliance. 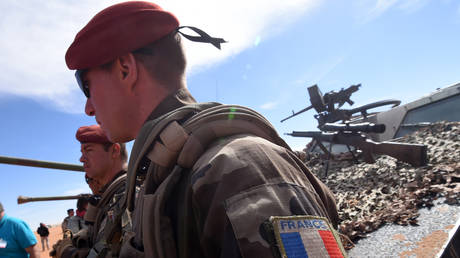 Peruvians in Amazon get VETERINARY...