Four teenagers have been charged in France in relation to the murder of Samuel Paty, including three who allegedly identified the teacher to his killer before he was beheaded in a street near his school.

The three individuals, aged between 13 and 14, are charged with complicity in a terrorist murder. The fourth teenager, who is the daughter of the parent who launched an online campaign against Paty, is charged with slanderous denunciation.

Due to their age, French law prohibits the publication of the pupils’ names.

The brutal murder sparked outrage in France and restarted a debate about free expression in a country that has been plagued by acts of religious extremism in recent years, with terrorist attacks having taken the lives of more than 250 people since 2015.

Seven people were initially charged following the killing, including two students and a parent of one of Paty’s pupils. Six were charged with complicity in a terrorist murder, while one was accused of having close contact with the murderer and associating with a terrorist.

All of the suspects, except the two minors, aged 14 and 15, were remanded in custody.In response to the crime, French President Emmanuel Macron has pledged to crack down on violence and radical Islam in a move that has led to backlash from majority-Muslim countries, who have accused the political leader of scapegoating their religion. 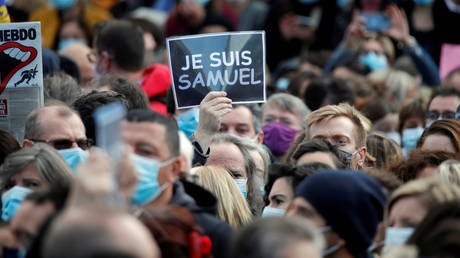 Fury as Amazon Alexa ‘spreading an...