Former adult actress Mia Khalifa has escalated her attacks on Shakira, claiming that the singer has done the “bare minimum” to help Beirut blast victims, despite her Lebanese heritage.

The musician revealed this week that she is teaming up with Lebanese fashion designer Zuhair Murad to raise relief funds for Beirut, following the deadly explosion earlier this month that caused at least 181 deaths and over 6,000 injuries.

But the move did little to appease the Beirut-born ex-porn star, who has repeatedly taken Shakira to task because she feels the singer should be doing more to help out. Shakira was born and raised in Barranquilla, Colombia, but her paternal grandparents were immigrants from Lebanon to the United States. Her father then emigrated to Colombia at a young age. The artist has been vocal about embracing her Middle Eastern family background.

Instagram star Khalifa has been extremely vocal about the Beirut blast, posting countless updates about the situation across several social media platforms. She previously scolded Shakira for her silence, despite her being “half-Lebanese.”

After Shakira revealed the collaboration with Murad on Thursday, Khalifa again decried the effort. “Shakira really said ‘the bare minimum. Yes, I’ll do that,’” she wrote in a scathing Instagram update.

Khalifa’s post included a photo of Shakira wearing a white “Rise From The Ashes” T-shirt from the Lebanese fashion designer’s fundraising campaign, along with a graphic that says, “We can do better.”

Shakira said that all proceeds from the limited edition garment will be donated to the Lebanese Red Cross and Offre Joie, two organizations that are “on the ground responding to humanitarian needs for the people of Beirut” following the disaster.

“In these difficult times, the only way for me to move forward is by helping in any way that I can, so I have launched a fundraising T-Shirt campaign,” Murad said of the effort.

After the success of that campaign she started to raise funds through the Cameo video sharing app by granting fans’ requests for $300. 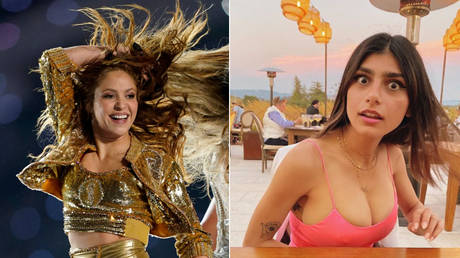