Mahmoud Ezzat, who served as the acting leader of the Muslim Brotherhood for several years, has been sentenced to life in prison for inciting violence and supplying firearms during the 2013 Egyptian protests.

The court ruling comes months after Ezzat was detained during a raid on an apartment in Cairo. and marks the latest crackdown on the Muslim Brotherhood since it was removed from power in a coup d’état.

The case focused on charges of inciting violence and providing supporters with firearms amid violence outside the Muslim Brotherhood’s headquarters in 2013, with Ezzat’s legal team dismissing the prosecution as being based on “false political charges.”

Previously, Ezzat was sentenced to both life in prison and the death penalty in a separate trial over his alleged role in the 2013 protests. However, as he was absent from the original court case, as per Egyptian law, he will now face a retrial.

Ezzat, under his official title of Acting General Guide of the Egyptian Muslim Brotherhood, had been an influential figure in the group since former leader Mohamed Badie was detained.

Both of Ezzat’s predecessors, Badie and Mohammed Mahdi Akef, were arrested on similar charges. Badie is serving seven life sentences and awaiting execution, having been sentenced to death, while Akef died from cancer ahead of a retrial in Cairo, following a successful attempt to overturn his conviction.

The Muslim Brotherhood lost control of Egypt in 2013, just a year after winning the presidential election, when the military conducted a coup d’état and placed members of the party under house arrest, sparking widespread protests. Since then, the organization has been banned and declared a terrorist group in the country, allowing authorities to detain dozens of Muslim Brotherhood officials and supporters. 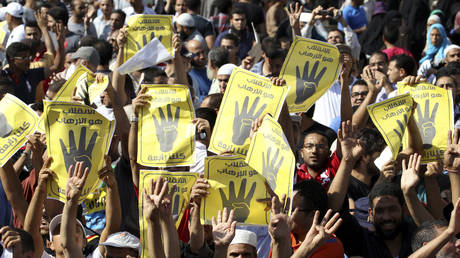 Incoming asteroid to pass between...

Not worthy enough for woke brigade...