The ESA has shared an incredible piece of footage, painstakingly reconstructed, showcasing Mars’ mighty Korolev crater, a likely future source of water for human colonists, should we ever make it there.

The remarkable video is actually a moving mosaic which combined scans of the surface of the planet with topographical data, captured by a high resolution stereo camera on board the Mars Express probe, to produce a 3D landscape.

The video was produced with a resolution of 21 meters per pixel and shows the full extent of the 82km wide (50 mile) Korolev crater in the northern lowlands of Mars. The crater is filled with ice all year round as its floor is two kilometers (1.2 miles) below its rim, making it a natural cold trap which shields the ice from the elements.

The Mars Express orbiter mission launched on June 2, 2003, reaching the Red Planet six months later and beaming back incredible images of the planet ever since. It is the second-longest-surviving, continually active spacecraft in orbit around an alien world, second only to NASA’s 2001 Mars Odyssey.

The crater itself was named in honor of chief Soviet rocket engineer and spacecraft designer Sergei Pavlovich Korolev (1907-1966), dubbed the father of Russian space technology for his contributions to the R7 Russian intercontinental rocket.

Korolev’s designs put Sputnik in orbit in 1957 and sent Yuri Gagarin into space in 1961, and now future generations of spacefarers and explorers are beaming back images of the Martian crater which bears his name, in stunning detail worthy of his great achievement. 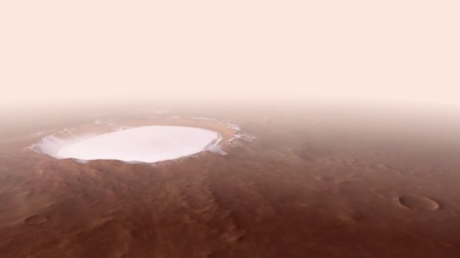