Israel’s Mossad retrieved “human-processed uranium” that was “perhaps yellowcake (uranium oxide in solid form)” during a “daring raid on Iran’s nuclear archives” in 2018, the mustachioed warmonger declared in his controversial Trump administration memoir, ‘The Room Where It Happened’. The discovery, Bolton alleged, was substantiated when the International Atomic Energy Agency subsequently conducted an inspection of Iran’s Turquzabad site. Israeli media trumpeted the vague, unverified claim over the weekend, publishing selected quotes from the book.

Bolton insisted the discovery “could well be evidence that Iran kept alive its ‘Amad plan’ for nuclear weapons after it was supposedly ended in 2004.” However, despite the wild claims leveled against Tehran by Israeli PM Benjamin Netanyahu in his theatrical speech following the raid, the IAEA denied Tel Aviv had uncovered any evidence that would change the international understanding of Iran’s nuclear activities. Iranian foreign minister Javad Zarif, meanwhile, accused Netanyahu of deliberately tailoring his speech to give the Trump administration a rationale for withdrawing from the JCPOA nuclear deal – which it did, much to Bolton’s delight.

While the Trump administration has thus far stopped short of bombing Iran, hope springs eternal – Bolton has pushed for war with the Islamic Republic for years. So has Netanyahu, who has claimed since 1992 that Iran’s nuclear bomb was right around the corner and has been trying to convince the US to share his view ever since.

The former Trump official’s yellowcake claims – tellingly couched in qualifying words like “perhaps” and “could be” – carry disturbing echoes of the phony intelligence used by Bush’s administration to justify the disastrous invasion of Iraq in 2003. Bolton himself had pushed to have unsubstantiated allegations that Iraqi leader Saddam Hussein was trying to purchase yellowcake uranium from Niger as part of a top-secret nuclear weapons program included in a ‘fact sheet’ on Iraq’s “weapons of mass destruction” drafted by the administration in 2002. Even after US diplomat Joseph Wilson traveled to the African nation and found no factual basis for the yellowcake claims – a conclusion backed by French intelligence, the CIA, and the US Embassy in Niger – the neoconservative core of the Bush administration, including Bolton, clung to the yellowcake story. No WMDs were found after the US invaded Iraq the following year – not that Bolton ever apologized.

The Iraqi yellowcake story is widely agreed to have been the result of a skilled forgery pushed by regime-change enthusiasts who wanted Iraq’s government toppled and didn’t care how much they had to mangle the truth to get it. Neocon hawks like Bolton and fellow Bush administration heavyweights Donald Rumsfeld, Paul Wolfowitz, and Richard Perle had been championing war with Iraq for over a decade, repeatedly and unsuccessfully pushing then-president Bill Clinton to invade before they finally got their wish with Bush in 2003.

As CIA analysts at the time explained, refining yellowcake into the material used in nuclear bombs requires extensive processing and sophisticated technology Iraq did not have – never mind the logistical difficulties inherent in moving the 500 tons Hussein was supposedly purchasing out of Niger. Additionally, Iraq was already sitting on over 550 tons of uranium oxide. So why, they wondered, would Baghdad risk arousing international suspicions by buying more if it was embarking on a clandestine nuclear program? But Bolton and his cohort were known for their persistence; “Stick that baby in there 47 times, and on the 47th time it will stay” was how the Pentagon’s Larry Wilkerson described their modus operandi to Vanity Fair. Even after the IAEA itself declared the Niger documents to be forgeries, the Bush administration plunged ahead with the war that has turned the Middle East into a chaotic quagmire of political instability, terrorism, and human suffering.

Iran’s compliance with the JCPOA deal has been repeatedly certified, even as Bolton and his fellow hawks attempted to discredit the inspection process. With the ink on the deal scarcely dry in 2015, Bolton was already claiming Iran was operating “secret nuclear facilities” and calling for the Obama administration to bomb the country. He then spent much of his time as Trump’s national security advisor advocating for a military response to any perceived slight – especially after the US exited the JCPOA. At the same time, Israel continues to push “bombshell” reports alleging violations of the deal, with the most recent coming earlier this month and based on data Tehran claims was supplied by Mossad.

Bolton has been industriously milking his 15 minutes of fame, heralded by the media as a #Resistance hero ever since his book skewering the Trump administration was copiously leaked to mainstream outlets, over the president’s protestations. The tome contains a number of questionable revelations, including that Trump thought Venezuela was “really part of the US” and invading it would be “cool” until Russian President Vladimir Putin bent his ear, discouraging the idea. Trump slammed the book as the fictional musings of a “sick puppy.” 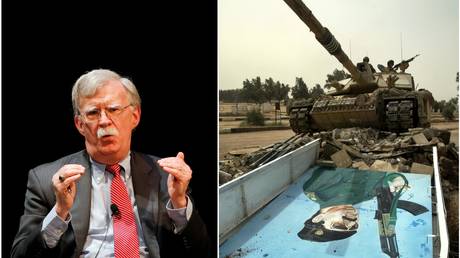