Close
Trending News
HomeWorldFive asteroids to fly past Earth in coming week, as NASA identifies space rock with highest odds of hitting us

Five asteroids to fly past Earth in coming week, as NASA identifies space rock with highest odds of hitting us

Five asteroids to fly past Earth in coming week, as NASA identifies space rock with highest odds of hitting us

NASA’s asteroid watchers have given a heads-up about five asteroids headed toward Earth in the coming days, while the agency’s automated Sentry system has identified the space rock which has the highest chance of impact.

Lest anyone get too comfortable and breathe a sigh of relief, however, NASA warns that a further three space rocks are expected in these parts next week.

To put that into perspective, the average distance between Earth and the moon is about 239,000 miles (385,000 kilometers).

Meanwhile Sentry, NASA’s impact monitoring system, has identified the asteroid with the highest likelihood (that we know of at present) of hitting the Earth.

“Sentry is a highly automated collision monitoring system that continually scans the most current asteroid catalog for possibilities of future impact with Earth over the next 100 years,” NASA explained in a statement.

With a diameter of about 46 feet, there is no danger of 2012 HG2 hitting the ground as it is simply too small and would likely burn up in the atmosphere, providing some spectacular ‘fireworks’.

It is expected to pass Earth on October 22 this year, at a comfortable distance of 33 million miles. 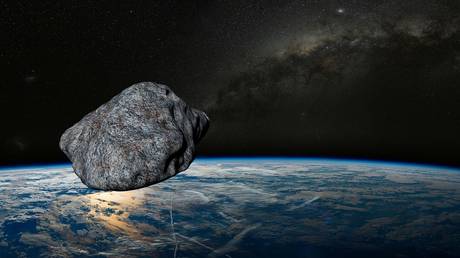