Close
Trending News
HomeWorldFIVE asteroids due to buzz Earth in ONE DAY, as scientists claim space rock once robbed up to 60% of planet’s atmosphere

FIVE asteroids due to buzz Earth in ONE DAY, as scientists claim space rock once robbed up to 60% of planet’s atmosphere

FIVE asteroids due to buzz Earth in ONE DAY, as scientists claim space rock once robbed up to 60% of planet’s atmosphere

NASA has announced that at least five asteroids are due for close flybys of Earth on October 1 alone. Meanwhile, researchers believe one giant impact in the past once removed up to 60 percent of Earth’s atmosphere.

October appears to be kicking off with a bang as a barrage of space-borne boulders heads our way over the course of Thursday.

The largest of Thursday’s unwanted visitors, 2020 RJ3, measures about half the height of the Great Pyramid of Giza, or 69m, and is expected to pass at 5.85 million kilometers.

Meanwhile, researchers at Durham University in the UK just revealed they believe the Earth may have lost between 10 and 60 percent of its atmosphere in the asteroid collision suspected of creating the Moon.

We’ve used a supercomputer to see how hundreds of huge collisions affect rocky #planets with thin atmospheres. This video shows the consequences of different impacts on planets between half and double the #Earth‘s mass. Find out more 👉 https://t.co/hCylXvXjCu#DUResearch pic.twitter.com/yETFiUmmuN

In collaboration with an international team, lead author Dr Jacob Kegerreis et al ran more than 300 supercomputer simulations to determine the impact of asteroids on planetary bodies and the subsequent effect on their atmospheres.

At present, the leading theory suggests the Moon formed some 4.5 billion years ago following a collision between Earth and an object possibly as large as Mars, known as Theia.

“The puzzle about how the Moon formed and the other consequences of a giant collision with the early Earth is something that scientists are working hard to unravel,” Kegerreis said.

He cautioned, however, that the simulations don’t definitively prove or disprove any theories about how the Moon formed, but merely add to the growing body of research aiming to narrow down possible scenarios that might explain how the Earth gained its natural satellite.

The team examined different-sized objects, composed of iron, rock or both, impacting a planet from a variety of angles and speeds and what the consequences might be, once again highlighting the need for ongoing vigilance of the skies for incoming, potentially life-threatening spaceborne threats. 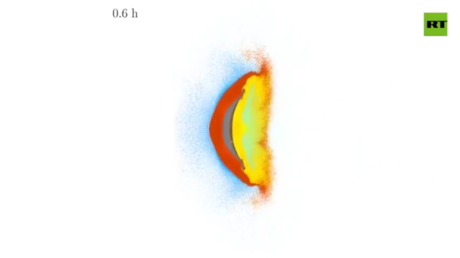 ‘You cannot lock down everybody’:...