After a furniture fixer in Valencia made a mess out of a reproduction of a 17th-century painting of the Virgin Mary, Spanish art conservators are clamoring for regulations to stop further desecration of cultural heritage.

The outrage was prompted by reports in local media that a copy of Immaculate Conception, a famous painting by the 17th-century artist Bartolomé Esteban Murillo, was damaged by a furniture restorer who charged an art collector €1,200 for the cleaning work. The face in the painting was left unrecognizable and only made worse by another attempt to “restore” it.

Remember the infamous “Monkey Christ” affair?
81-year-old Cecilia Giménez became world famous for her *ahem* “amateur restoration” of Ecce Homo by Elías García Martínez… can you guess which is the original?https://t.co/S3g4bMFSlf pic.twitter.com/AEZJEi40wW

“I don’t think this guy – or these people – should be referred to as restorers,” Fernando Carrera, an art professor and former president of Spain’s Professional Association of Restorers and Conservators (ACRE), told the Guardian. “Let’s be honest… They destroy things.”

Carrera is one of the people calling for regulation of who can be allowed to restore works of art. Another is Maria Borja, a current vice-president of ACRE, who said the restoration incidents are “unfortunately far more common than you might think.”

The most famous case was the 2012 “restoration” of Ecce Homo, a painting of Jesus Christ by Elías García Martínez almost a century prior on the wall of a church in Borja, Spain. Parishioner Cecilia Gimenez, then 81, feared the flaking painting would be destroyed by a water leak so she tried to restore it. The result became known as “Monkey Christ” or “Potato Jesus,” a caricature nothing like the original, which Borja has since embraced as a tourist attraction. 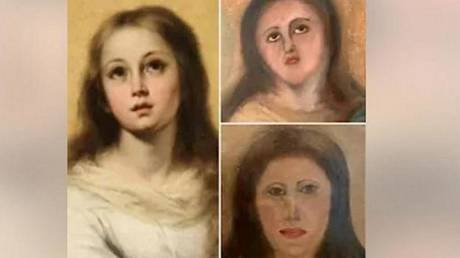