Ukraine’s former deputy infrastructure minister, Aleksandra Klitina, has bounced back from her scandalous firing last year, saying she is going to return to politics to fight corrupt men, but her looks overshadowed her message.

The 37-year-old former official announced the creation of her own party, called ‘Ukraine against corruption’ in a video posted on YouTube.

In the clip, which was filmed outdoors, Klitina appeared sporting what looks like a bikini or a rather revealing dress and delivered a strong-worded address, bashing the men now ruling Ukraine.

“I decided to fight for truth myself because those pants-wearing idiots are hopeless,” she proclaimed, promising that her party will “finally deal with those male political prostitutes.”

They think that if they have something in their pants, it’s enough for them to be successful and be eligible to abuse women. But women are a hundred times smarter and a hundred times more honest than you.

But online commenters were more interested in her looks than political message, confessing that they couldn’t understand a word she was saying due to being fully consumed by the image on screen.

The woman also addressed her firing from the post of deputy infrastructure minister in November last year, insisting that her boss Vladislav Krikliy moved against her only because she was preventing thievery in the ministry.

Her sacking was preceded by two online leaks, which made headlines in the Ukrainian media. First, the MPs for the ruling party of President Volodymyr Zelensky were taped saying that Klitina got to her high position through the bedroom. Then she became the victim of a prankster who she told that her boss was corrupt and that she would make a much better infrastructure minister than him.

The new party apparently doesn’t have too many members at the moment. At least, there was nobody to film and edit her address as the clip starts with the woman switching on the camera on her phone and ends with it being switched off.

Wide-spread corruption has been a major stumbling block in Ukraine’s development in recent decades. Every president, including Zelensky, vowed to eradicate it, but so far haven’t achieved any significant results. 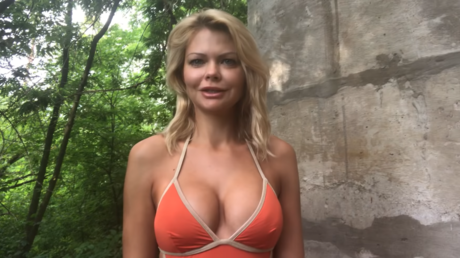