The true extent of the coronavirus spread in Finland had flown under the radar due to insufficient testing during the first wave of the pandemic, the latest antibodies test report has revealed.

The Finnish Institute for Health and Welfare (THL) began testing for antibodies in early April when the country was first hit by the outbreak. Although the proportion of people with antibodies has “remained low,” the results indicate that “there were roughly 1.5 to five times more infections compared to confirmed clinical cases obtained from the National infectious diseases register… during the first epidemic wave in spring,” the THL said in a statement on Wednesday.

THL head of health security Mika Salminen was quoted as saying that the difference in numbers is largely explained by the lack of testing capacities during the first week of the outbreak.

Like many European countries, Finland is struggling to contain the new upswing in Covid-19 infections. A total of 227 cases were recorded on Tuesday, which was a record-high increase from when new daily cases peaked at 211 in early April.Prime Minister Sanna Marin said the situation was “rapidly getting worse,” as she promised to unveil a fresh set of measures against the spread of the disease.

On Thursday, the THL also stated that the number of new cases has grown “significantly” over the past month. “In more than a half of new cases, the source of the infection remains unclear,” the officials said. 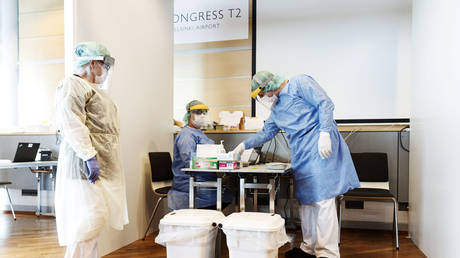