Grammy-winning singer has issued a rallying cry to the music industry to fight against what he calls “pseudoscientific” social distancing rules which are stifling a music industry comeback, though many of his fans disagree.

The 74-year-old Northern Irish crooner launched a campaign to “save live music” on his website last Friday, calling for full capacity concerts, as he argued socially-distanced gigs were simply not economically viable.

“I call on my fellow singers, musicians, writers, producers, promoters and others in the industry to fight with me on this,” Morrison wrote.

“Come forward, stand up, fight the pseudo-science and speak up.”

Lest he be called a hypocrite, Morrison also took the opportunity to address his upcoming, socially-distanced tour dates in England in September, saying they should not be misconstrued as “a sign of compliance or acceptance of the current state of affairs,” but instead a means “to get [his] band up and running and out of the doldrums.”

In his statement Morrison, who turns 75 on August 31, claimed that Andrew Lloyd Webber was the only one of his contemporaries attempting to resuscitate the music industry.

World-renowned composer and Morrison ally Lloyd Webber volunteered for the Oxford Covid-19 vaccine trial as he vowed to “do anything” to get theaters open again.

Just completed the Oxford Covid-19 vaccine trial. I’ll do anything to get theatres large and small open again and actors and musicians back to work. – ALW #SaveOurStages @nivassoc pic.twitter.com/pIcYZJPLps

He has yet to receive any notable public support from his fellow musicians since announcing his call to arms late Friday and appears instead to have divided his fans online, many of whom criticized his stance as self-serving and calling him out for largely remaining schtum on political matters throughout his lengthy career.

Given the average age of your fan base, you could kill off two thirds of us with a non-socially distanced concert #COVID19

Funny how you’ve never taken a stance on anything even remotely political till now when it affects your pocket book. As long as your fans buy your tickets who cares if they get Covid? Disgusting behaviour, Van.

I was trying to look up that gig, to remember the other fella’s name (because he came back on to give the crowd an extra set) and turns out Van Morrison does that all the time. Plus Mr “restrictions are bad” banned people drinking at his gigs at one point.

Apart from Van Morrison, there’s Jim Corr of the pop group The Corrs, the other high-profile musician in the UK and Ireland to publicly speak out against coronavirus restrictions, including the mask mandate.

He himself also briefly engaged in a Twitter spat with pop singers Jedward over his contrarian coronavirus stance. 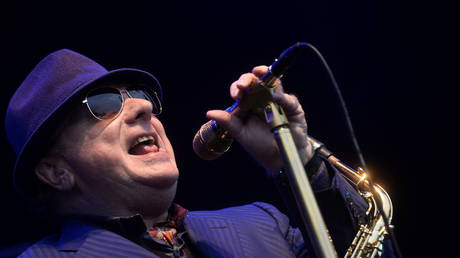 Gaza Strip goes into lockdown as i...