There may soon be a social media manager opening at the Vatican after the Pope’s Instagram account was caught ‘liking’ a photo of a Brazilian bikini model in a sexy schoolgirl outfit.

According to reports and alleged screenshots purporting to show the social media faux pas, none other than Pope Francis gave his blessing to 27-year-old Brazilian glamour model Natalia Garibotto.

Pope Francis’ Instagram account boasts 7.2 million followers so it was somewhat inevitable that some among the faithful would spot the Pope’s official Instagram name, Franciscus, among those who liked the sultry snap.

The official papal account no longer appears to like the picture but social media never forgets. Reactions to the mishap poured in over the weekend, with some claiming the Pope himself had fallen into a ‘thirst trap’.

I can’t believe this is real. pic.twitter.com/rJ7sdzhXNs

The more pious on Twitter offered their digital ‘thoughts and prayers’ to the Pontiff, who appeared to be enduring severe temptation. Some of the more devout called for calm, insisting there was no way the Pope himself ran his own social media accounts, while others encouraged people to follow the Bible alone.

The power of Christ compels him

This is why I follow the Bible, rather than any Catholic tradition.

Uncharacteristically for a celibate servant of God, Pope Francis said earlier this year that sexual pleasure is a divine gift, so perhaps his recent social media activity shouldn’t come as a surprise.

“The pleasure of eating is there to keep you healthy by eating, just like sexual pleasure is there to make love more beautiful and guarantee the perpetuation of the species,” Pope Francis said. 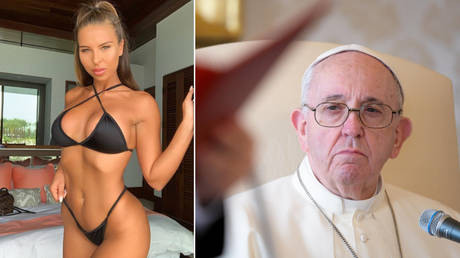 Nintendo Switch slashed to ONLY £2...