The French branch of the climate change movement Extinction Rebellion (XR) used a hose to spray fake blood on the facade of the office of the biggest employers’ organization in the country, accusing them of cynicism.

A handful of XR activists gathered at the headquarters of the Movement of the Enterprises of France (MEDEF) on Friday to “call out these lobbies on their cynicism,” as one of the participants put it.

The protesters showed up outside the building dressed in business suits, some holding cigars and 500-euro bills. They carried a banner reading: “Glory to MEDEF.”

At the peak of the protest, they used a large hose to spray red paint on the building and the sidewalk in front of it, saying the lobby has blood on its hands because they tried to undermine environmental restrictions in France.

The Extinction Rebellion movement was created in the UK in 2018 and came to global prominence last year on the back of a wider push to bring the threat of climate change into public view. The movement was criticized for deliberately provoking mass arrests of supporters during protest events to gain publicity. 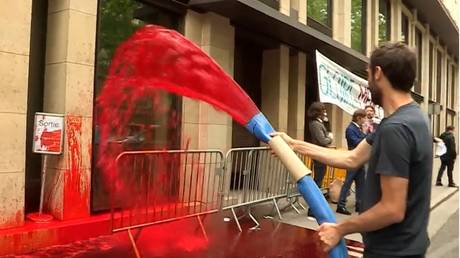 You thought asteroids were bad? ES...