Explosion kills at least 2, injures 3 at factory near Tehran (VIDEO)

Explosion kills at least 2, injures 3 at factory near Tehran (VIDEO)

At least two people were killed and a further three injured in an explosion at a factory in the Iranian city of Baqershahr near Tehran in the early hours of Tuesday morning.

The explosion took place shortly after 3am local time and was reportedly the result of “negligence in filling oxygen tanks,” according to the Kahrizak district governor. Emergency services immediately scrambled to the scene and prevented the resulting fire from spreading to nearby buildings in the industrial estate.

An explosion reportedly damaged a factory south of Tehran in the early hours of Tuesday, the latest in a series of blasts in Iran.
According to Iranian media reports, two people were killed and three were injured in the blast at the Sepahan Bresh factory in the Kahrizak district. pic.twitter.com/NypHaV5B8V

“The explosion… was so powerful that the walls of the Saipa Press factory nearby were also totally destroyed,” added local administrator Amin Babai.

A series of explosions and fires having been witnessed across the country in recent weeks.

Meanwhile, authorities in Tehran have denied reports of an explosion at the Shahid Rezaei Nejad nuclear complex in Yazd. A fire broke out at the site last week, but the nature of the incident remains undisclosed for security reasons. Still, authorities confirmed that there were no nuclear materials at the scene, and no leaks of radioactive material. 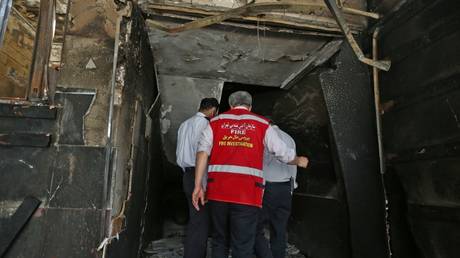 Fishy excuse? Denmark could use SP...