Two European privacy watchdogs have joined forces to call for a blanket ban on the use of biometric recognition in public spaces, outlawing such tech as AI-based facial, DNA, fingerprint and other recognition systems.

“The EDPB and the EDPS call for a general ban on any use of AI for automated recognition of human features in publicly accessible spaces, such as recognition of faces, gait, fingerprints, DNA, voice, keystrokes and other biometric or behavioral signals,” the two watchdogs said.

Joint opinion of @EU_EDPB and #EDPS on the @EU_Commission ‘s proposed Regulation on #AI.
Among other recommendations, they call for a ban on the use of AI for automated recognition of human features in publicly accessible spaces.
Read Press Release https://t.co/oMe24meYog pic.twitter.com/lr0Ko4vGJG

Remote biometric identification, and, in particular, use of AI for such purposes, pose extremely high risks for European society and its values, the watchdogs warned. A blanket ban on facial recognition tech should be the first step to avoid turning into a high-tech dystopia, they argue.

“A general ban on the use of facial recognition in publicly accessible areas is the necessary starting point if we want to preserve our freedoms and create a human-centric legal framework for AI,” the heads of the two watchdogs said, in a joint statement.

The proposed regulation should also prohibit any type of use of AI for social scoring, as it is against the EU’s fundamental values and can lead to discrimination.

While non-binding, the pair’s joint opinion could influence the EU’s proposed regulation on AI use, though the watchdogs took a significantly tougher stance on recognition tech, even compared to the already-tough proposed legislation.

New rules on artificial intelligence proposed by the European Commission back in April envision a ban on most surveillance tech. However, they would still allow the use of some AI applications for security purposes, such as law enforcement or migration control.

Suppliers of such tech, however, are expected to be put under very strict safeguards, with proposed fines for breaches as large as 6% of a company’s global turnover. 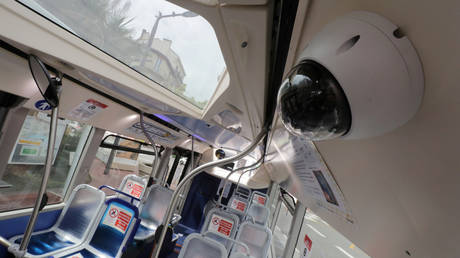