The news that Iran has triggered a dispute-resolution mechanism built into the 2015 nuclear deal should not be overstated, Tehran’s top diplomat suggested, after some media reports predicted the imminent collapse of the agreement.

The news about a dispute that Iran has with France, Germany, and the UK, and seeks to resolve under the nuclear deal, were made public by the EU’s foreign policy chief Josep Borrell. He said in a statement that he had received a letter from Iranian Foreign Minister Mohammad Javad Zarif, notifying of the activation of a formal mechanism for resolving such disputes. He did not explain what the dispute was about.

The nuclear deal, also known as the Joint Comprehensive Plan of Action (JCPOA), was signed by Iran, the US, the UK, Germany, France, China, Russia, and the EU in 2015. It offered Iran relief from international sanctions and business opportunities in exchange for restrictions on its nuclear industry. The Trump administration broke the agreement in 2018, and other members are struggling to keep it afloat amid Washington’s campaign of “maximum pressure” against Tehran.

Following the news, some in the media speculated that the nuclear deal is about to meet its end, with Iran set to withdraw from it over the dispute. While the nature of Iran’s complaint remains undisclosed, speculation is rife that it has something to do with Tehran blaming an Israeli cyberattack for a recent incident at its nuclear-enrichment facility in Natanz.

The pessimistic expectations don’t seem to be shared by Zarif himself, however, who said on Saturday that it was the sixth time Iran had triggered the JCPOA dispute-resolution mechanism to date. “Don’t believe the hype,” he tweeted.

Don’t believe the hype: Iran triggered #JCPOA DRM on at least 6 occasions (in ref to U.S. AND E3 violations)

I will be publishing all my letters shortly. pic.twitter.com/153H4wXlhD

The mechanism is a formal multistage mediation process, which may be prolonged indefinitely by a consensus agreement, or give the complaining party the grounds to stop delivering on its commitment under the deal. Iran repeatedly accused the US of breaking its terms, and has been gradually rolling back compliance since May 2019 – a year after the US withdrew from the deal.

European signatories activated the same mechanism in January, responding to Iran’s increasing refusal to adhere to the terms of the JCPOA. Despite complaints on both sides, the signatories have regularly stated their commitment to keeping the deal alive.

Tehran says the European contingent has failed to protect it from crippling US sanctions and thus denied Iran all the economic benefits promised when the deal was being negotiated. Washington has threatened anyone doing business with Iran with secondary sanctions, spooking large European companies. A special European mechanism that was supposed to allow financial transactions with Iranian entities without US knowledge has failed to gain traction so far. 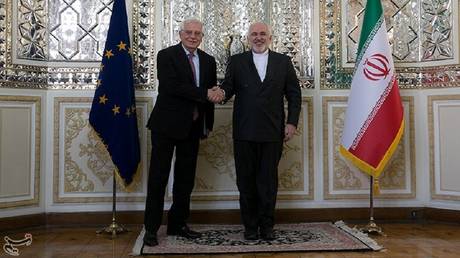 EU to propose removing most No...