A post-Brexit trade deal between the EU and UK is possible, but only if London stops “backtracking” on its commitments and shows a “willingness” to work towards an agreement, Brussels’ top negotiator Michel Barnier has said.

Speaking at a video conference on Wednesday, Barnier urged the UK to send “clear signals” demonstrating that it’s ready to work towards an agreement with the European Union before the end of the Brexit transition period on December 31.

“Our problem is not related to timing, but to substance, in particular, that the UK keeps backtracking on its commitments in the political declaration,” he said.

Barnier said a failure to achieve a deal would hurt the British economy more than the EU’s, and warned that Brussels would never sacrifice the bloc’s long-term economic and political interests for the “sole benefit” of the UK. He also stressed that the negotiations needed to be accelerated.

Britain left the EU on January 31, but is staying within the single market and customs union during the transition period, while the trade terms of its future relationship with the now 27-member bloc are finalized.

Unresolved issues include the ‘open skies’ air-travel agreement, the UK’s commitment to the European Convention on Human Rights, the European Court of Justice, fisheries, and customs checks on goods coming from the UK mainland into Northern Ireland. Barnier told London to implement last October’s deal on administering the Irish border, and said Brussels was ready to find a “margin of flexibility” on the fisheries sticking point.

Formal talks between the UK and the EU will resume on June 29. UK Prime Minister Boris Johnson has said he is aiming to conclude the trade deal in July, and has rejected suggestions to extend the transition period. The EU, in contrast, expects that a deal will be reached only in October.

The EU-UK negotiations have failed to make progress since the beginning of the Covid-19 pandemic. Last week, European Council President Charles Michel reiterated that the EU is committed to finalizing an agreement, but not “at any cost,” while UK Cabinet Office Minister Michael Gove warned that a no-deal scenario is still possible. 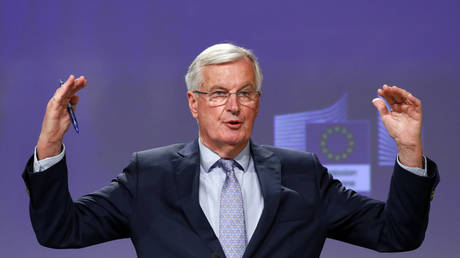