European ministers have fired warning shots at London ahead of crunch Brexit talks in Brussels this week. Germany sees this period as ‘critical’, while France has called for unity among the 27 member states.

As the European Council prepares to meet on Thursday, and with UK Prime Minister Boris Johnson’s October 15 deadline looming large, European ministers took the opportunity to remind London of their demands. Their comments came as ministers arrived in Luxembourg on Tuesday for talks and an update on trade negotiations by EU’s chief negotiator, Michel Barnier.

Germany’s EU affairs minister, Michael Roth, shared his reservations, “we are at a very critical stage in the negotiations and we are extremely under pressure. Time is running out.”

That’s why we expect substantial progress by our friends in the United Kingdom in key areas: in particular on governance, level playing field and fisheries.

France’s EU affairs minister, Clement Beaune, reiterated Roth’s demand for progress, adding that the bloc needed to be “very firm.” He said it was “important … to remind of the need for a very united position from the 27, of the European Union.”

Beaune has been very vocal in defending the rights of French fishermen to access fisheries around the British Isles. On Monday, he told the Telegraph that France “will not accept a bad deal and a bad deal in fisheries in particular,” adding that they “will have no weakness on this issue … that is clear.”

EU access to UK fisheries was a major bone of contention during the 2016 referendum. With the French not willing to back down over fishing rights, Johnson’s government has been urged to stay by Brexiteers and environmentalists keen to see foreign supertrawlers banned from UK waters.

It is predicted that around a trillion euros of annual trade are at stake in the Brexit negotiations.

Johnson has remained insistent on his October 15 deadline, claiming the UK was content to walk away with a no-deal, while other European leaders have chosen to rebuff the PM’s ultimatum. Barnier has previously stated that he expects negotiations to continue beyond Johnson’s deadline and Beaune claimed that a deal needs to be done by the start of November. 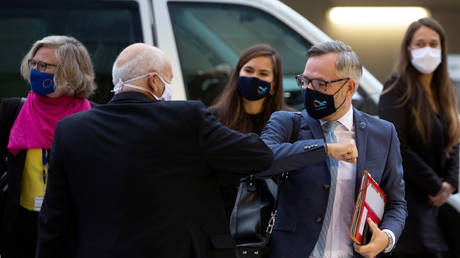