German Chancellor Angela Merkel has issued a warning over the Delta variant of Covid-19, after calling for British tourists in the EU to quarantine. UK PM Boris Johnson meanwhile sees a “real opportunity to open up travel”.

Merkel warned that Europe is “still skating on thin ice” with coronavirus, despite dwindling infections and a rise in vaccinations. Speaking ahead of an EU summit which has started in Brussels, she said Europe, and Germany, should watch out for the new variants of the virus, notably the Delta strain, and urged caution.

Her comments come after EU health officials predicted on Wednesday that the Delta variant could account for 90% of all new cases across the EU by the end of August. Andrea Ammon, the director of the European Centre for Disease Prevention and Control (ECDC), said on Wednesday that it was important to fully vaccinate people because the Delta variant can infect individuals that have received only one dose of a vaccine.

The Delta variant of coronavirus was first identified in India last year and is more contagious than the previous strains. Dr. Mike Ryan of the World Health Organisation said earlier this week that it’s the “most able, fastest and fittest” of Covid-19 viruses and “will pick off the more vulnerable more efficiently.” The World Health Organization (WHO) earlier called Delta the dominant variant of the disease worldwide.

Delta now accounts for almost all new infections in the UK. However, British PM Boris Johnson has announced that there was a “real opportunity to open up travel” over the holiday period for those who are fully vaccinated.

The British government is expected to announce plans later today for fully vaccinated people to be able to travel to amber-list countries and not have to quarantine for 10 days upon return, which is a requirement currently. Most of the European countries are on the amber list at the moment, but the list is expected to be reviewed.

Merkel, however, is lobbying EU countries to force vaccinated Britons arriving in Europe to quarantine due to concerns over the quickly spreading variant.

British environment secretary George Eustice claimed that the measure proposed by Merkel was not necessary and not justified.

As for spreading the virus, the WHO admits that a jab “may” also protect other people, because a vaccinated person is “less likely” to infect someone else. 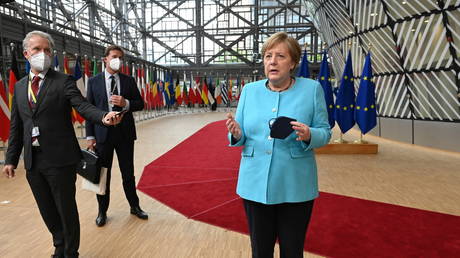