The European Commission has recommended that rapid Covid-19 antigen tests should be used primarily on individuals who are already showing symptoms of the virus, as they have been found to be less effective in asymptomatic cases.

In new recommendations for its 27 member states on the use of different coronavirus tests, the Commission stated that “rapid antigen tests should be used within five days after the onset of symptoms or within seven days after exposure to a confirmed Covid-19 case.”

Currently, EU governments are responsible for producing their own rules for responding to coronavirus, including testing. The European Commission urged them to adopt common standards, “aligning” their approaches “as much as possible,” because “effective testing plays a key role in the smooth functioning of the internal market.”

The EU body explained that, while rapid antigen tests can provide results within a few minutes compared to several days in the case of PCR tests, they are less precise.

The European Commission also accepted the World Health Organization’s recommendation that member states should only use rapid tests that have more than 80 percent sensitivity and 97 percent specificity – and only if PCR tests are “temporarily limited.”

The testing recommendation comes as the European Commission announced it was taking action to support increasing testing capacity by contributing €35.5 million ($42.1 million) – financed by the Emergency Support Instrument – to the International Federation of the Red Cross and Red Crescent Societies. 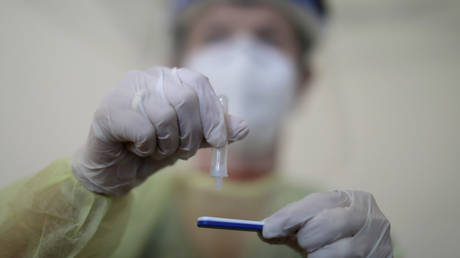