EU Commissioner Phil Hogan is the latest political casualty of the ‘Golfgate’ scandal in which a host of Irish politicians partied at a golf club dinner, hours after introducing strict lockdown measures for the public.

Hogan attended a lavish party at the Station House Hotel in Clifden, County Galway, last Wednesday. Together with more than 80 people, including current and former MPs, senators, ambassadors and a supreme court judge, Hogan dined in an event organized by the Oireachtas (Parliament) Golf Society.

While guests sat ten to a table, the Irish public were hit with new coronavirus lockdown measures. These included a ban on indoor gatherings of more than six people at home and more than 50 in restaurants. Most pubs in the country remain closed too, and the entire county of Kildare, which borders Dublin, is under strict lockdown.

Hogan insisted that he broke no regulations, as he tested negative for Covid-19 two weeks before the dinner. However, Irish regulations require anyone returning from abroad – as Hogan did from Brussels – to quarantine for 14 days, test or no test. Since his return from Belgium, it emerged that not only did Hogan not quarantine at home, he journeyed to Dublin, Kilkenny and Limerick – via the quarantined county of Kildare.

Tonight Commissioner @PhilHoganEU submitted his resignation. I respect his decision. I am grateful for his work as a Trade Commissioner and a member of my team. https://t.co/xPcdLX3kmy

With public anger high, Hogan is not the only Irish politician whose career was jeopardized by ‘Golfgate’. Agriculture Minister Dara Calleary resigned last week after apologizing “unreservedly” for his attendance.

For Ireland’s newly-appointed Taoiseach (Prime Minister) Micheal Martin, the scandal is yet another bump in a rocky two months in office. Since forming a government in June, Martin has already lost one agriculture minister over a drunk driving charge, and faced criticism for bumping up the paychecks of his junior ministers at a time of virus-induced austerity. 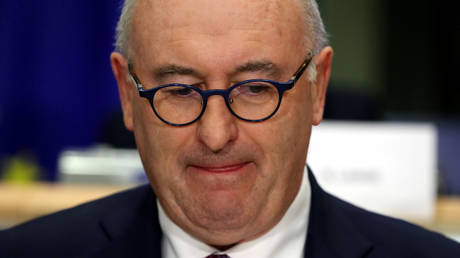