Foreign ministers of the European Union have agreed to sanction Belarus over ‘election fraud,’ and the heavy-handed police response to protests, tasking the Brussels bureaucracy with compiling a blacklist of officials in Minsk.

“We cannot ignore the facts of election fraud and the use of force,” Polish Foreign Minister Jacek Czaputowicz said after a conference call of 27 EU foreign ministers on Friday. He added that the EU foreign policy unit has been tasked with putting together a list of officials to be sanctioned.

Important discussion of #EU Foreign Ministers on #Belarus, consensus that elections were rigged, EU 🇪🇺 starts working on individual targeted measures against those responsible for violence against peaceful protesters and the election fraud.

Mass protests began shortly after the presidential election last Sunday, which the incumbent President Aleksandr Lukashenko won in a landslide, according to official results. Thousands have been arrested and two people have died in the five days of unrest, with viral videos showing law enforcement brutally dispersing demonstrators calling for regime change.

Ahead of the ministerial teleconference, European Commission President Ursula von der Leyen called for “additional sanctions against those who violated democratic values or abused human rights” in Belarus and expressed confidence the foreign ministers will “demonstrate our strong support for the rights of the people in Belarus to fundamental freedoms and democracy.”

Opposition candidate Svetlana Tikhanovskaya, who has fled to Lithuania after Belarus security services said they intercepted a plot to assassinate her, called for peace on the streets – but insisted the election had been rigged. Lukashenko maintains the vote count was fair.

After consulting with his Polish counterpart Mateusz Morawiecki, Czech Prime Minister Andrej Babis has called for a new presidential election in Belarus.

“The election in Belarus must be repeated, must be transparent and with the presence of foreign observers,” Babis said on Friday.

Lukashenko has accused the Czech Republic and Poland of seeking to organize a ‘color revolution’ in Belarus. Prague and Warsaw have denied the allegations. 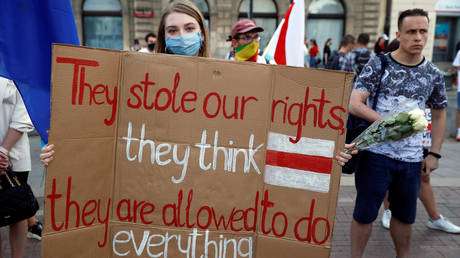