Tighter internal borders and a more robust online counter-terrorism approach need to be implemented following a string of terrorist attacks in Europe, EU ministers have said.

The interior ministers of the 27-nation bloc issued a joint anti-terrorism statement after a meeting on Friday, the fifth anniversary of the France terrorist attacks of 2015 in which 130 people were killed.

Measures to combat terrorist content and hate speech online would be agreed upon by the end of the year to enable issuing orders for removing material “within an hour or less of its being reported,” they said. The statement referred to the killing of French teacher Samuel Paty – whose use of Prophet Mohammed cartoons in free speech lessons sparked backlash online – as showing the importance of combatting “online illegal content, terrorism propaganda, hate speech and disinformation.”

Ministers said they are also working on improving the monitoring of convicted terrorists, such as Kujtim Fejzullai, the Vienna attacker who killed four people. He was sentenced last year for trying to join Islamic State (IS, formerly ISIS) in Syria and released from prison early

The statement added: “We want to strengthen and further develop options for security measures within the Schengen area as well as instruments for cross-border law enforcement cooperation.”
Ministers also called for more funding for law enforcement agency Europol in order to provide it with a stronger mandate in intelligence.

The summit of interior ministers comes after recent terrorist attacks in Paris, Dresden, Conflans-Saint-Honorine, Nice and Vienna. “These are attacks on our common European values and on our fundamental rights,” European Commissioner for Home Affairs Ylva Johansson said at a press conference after the meeting on Friday.

Macron put forward the idea of creating “common databases” to tackle terrorism, while Merkel said it is vital to “know who comes in and who leaves the Schengen area.” 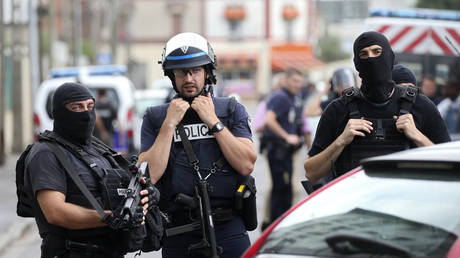