Austrian Foreign Minister Alexander Schallenberg said that the EU should rethink its approach towards Turkey, as its controversial maritime oil and gas exploration policy risks exploding into a bigger conflict.

Schallenberg said that Vienna is “very concerned about the dangerous and alarming situation which we believe could escalate.”

Actions taken by certain states in the eastern Mediterranean… should lead the European Union to re-evaluate its relations with Turkey.

Ankara was locked in a naval standoff with its historic rival Greece earlier this week. Turkey sent survey vessel ‘Oruc Reis,’ along with an armed escort, to explore natural gas off the Greek island of Kastellorizo, which lies close to the southern Turkish coast. After Greece dispatched warships to monitor the situation, Turkish President Recep Tayyip Erdogan warned that Athens would “pay a heavy price,” if ‘Oruc Reis’ is attacked.

Turkish exploration and drilling for gas and oil off the coasts of Greece and Cyprus often lead to protests from the EU. On Thursday, French President Emmanuel Macron accused Turkey of sparking tensions through its “unilateral decisions on oil exploration,” and promised to reinforce France’s military presence in the eastern Mediterranean in support of Greece. 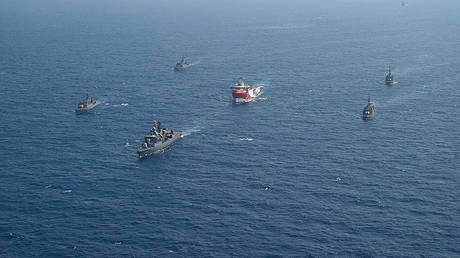